A task force examining the safety of moving liquefied natural gas (LNG) by rail across the United States said the super-chilled fuel has been transported safely by sea and road for decades, as well as by rail in other countries, but the group noted more research is needed. 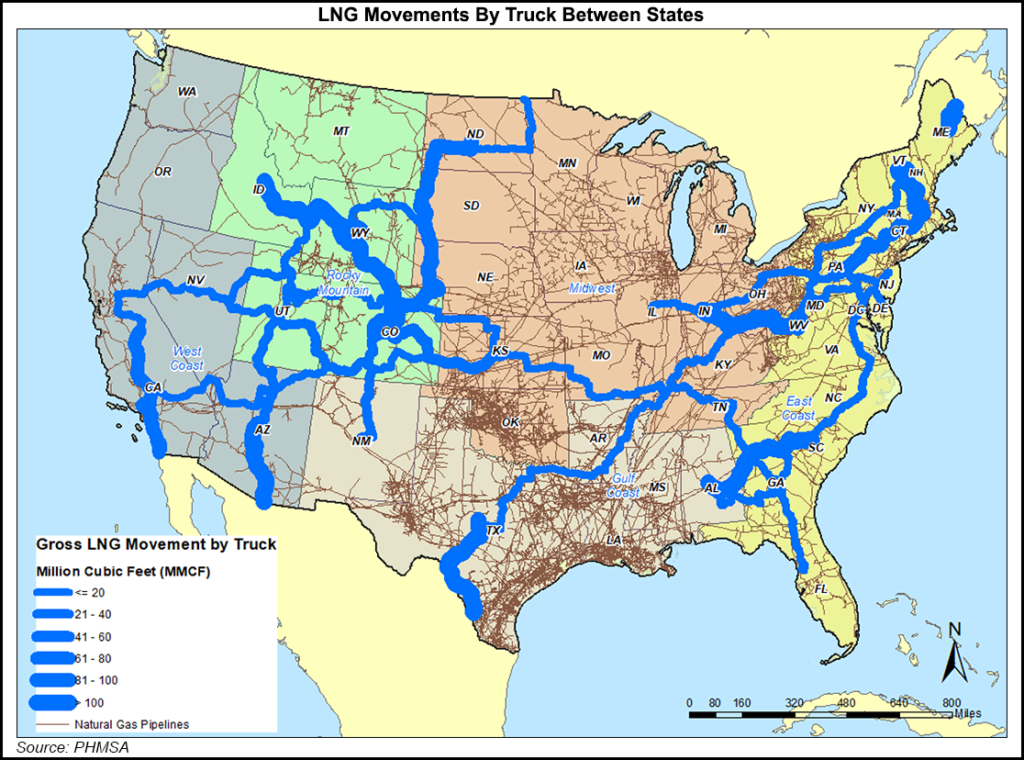 The task force was convened by the National Academies of Sciences, Engineering, and Medicine at the request of Congress. Early research found no reports of major safety incidents in countries actively transporting LNG by rail. However, the researchers noted that the U.S. rail network is far more expansive and hosts heavier, larger cars carried on longer trains.

“In general, it appears that LNG has been moving without major incidents in the handful of countries where there is demand for its transportation by rail and approval to do so,” the task force said in the first phase of the report.

In the United States, transporting LNG by rail was not authorized until last year, when federal regulators issued a final rule allowing for its bulk transport in specialized rail cars. The Department of Transportation (DOT)-113C120W cryogenic tank cars, which are thicker, are more resistant to puncturing. Rail carriers petitioned the government in 2017 to transport the fuel as natural gas production increased and demand grew in areas outside the nation’s pipeline network.

The final rule is a contentious one given safety concerns over the fuel’s flammability, cryogenic and handling properties.

The task force said additional tests of tanks holding cryogenic liquid are expected to take place this year before the study is finalized.

Researchers also conducted worst-case scenario modeling. Testing determined that a unit train that derails with standard DOT-113 tank cars would experience five punctures at the bottom of the tanks. An LNG release, the study found, would cover an area with a diameter of 95 meters, or a pool that would be about 10 times the length across a five-tank car pileup.

Additional modeling showed that the concentration of LNG vapors would be enough to cause a combustion hazard if such an event were to occur, extending 1.5 miles. More testing is to be conducted on how the specialized tanks react to fire and other worst-case scenarios.

“Through its analysis of the collected literature, incident data and interviews with subject-matter experts, the task force concluded that marine and highway transportation of LNG has occurred safely for several decades and identified training and maintenance of equipment as being crucial to safe loading and unloading operations,” researchers said.

“They further concluded that the LNG industry has learned from previous incidents and maintains a strong safety culture.”

Prior to last year’s blanket approval, U.S. regulators had approved moving LNG by rail on a case-by-case basis, beginning with the Alaska Railroad Corp. in 2015. The Florida East Coast Railroad was authorized two years later to move the fuel by rail in ISO containers.

Federal regulators also issued  a special permit in 2019 to an affiliate of New Fortress Energy Inc. (NFE) to carry LNG by rail from the shale fields of Northeast Pennsylvania to the shores of the Delaware River in New Jersey, where the company has proposed an export terminal.

The task force said it intends to conduct a safety and security route risk assessment of the three route options under consideration for NFE’s special permit once the company submits a shipping plan.

NFE’s permit indicated that an affiliate would begin with single-car shipments, progress to multi-car shipments and ultimately unit trains, with 20 or more cars. The unit trains could carry about 3 million gallons of LNG, or about the equivalent of what 300 trucks could carry.

The task force also indicated that it would continue working to ensure the emergency response community is prepared for the widespread shipment of LNG by rail. Early findings were released as part of the study’s first phase and could be modified as research continues. The study’s second phase is expected to be finished in mid-2022.