If current West Texas Intermediate (WTI) crude oil prices of around $40/bbl are sustained, all previously curtailed U.S. production would return by the end of September, according to Morgan Stanley researchers. 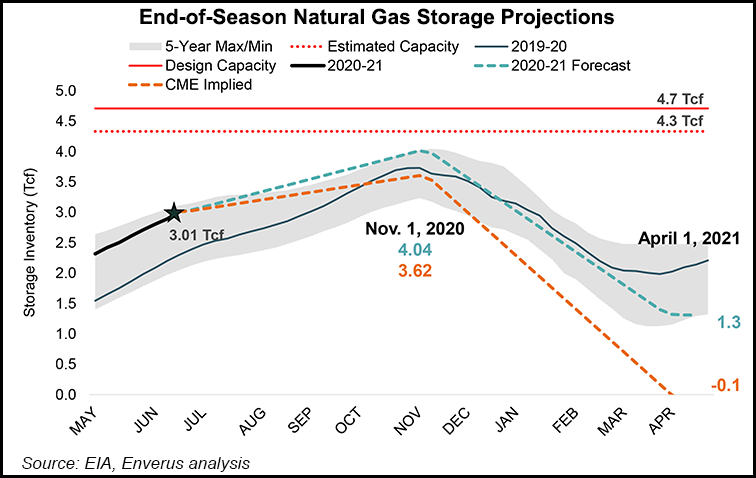 In a mid-year outlook issued Wednesday, the Morgan Stanley team, led by Equity Analysts & Commodities Strategist Devin McDermott, said the industry is in the first of a three-phase recovery. This first phase — reversal of curtailments — requires a WTI crude oil price of $25-30, while the second phase of production stabilization would require a WTI price of roughly $40 in order to hold 4Q2020 production levels flat. The final phase, according to Morgan Stanley, is the resumption of growth, which needs WTI prices to be around $40-50.

“With WTI now back around $40/bbl, pipeline flows suggest around 1 million b/d of curtailments have been reversed over the past few weeks,” researchers said. “If current prices hold, we believe effectively all curtailed volumes will return by the end of 3Q.”

On Tuesday, the Energy Information Administration (EIA) updated its own price forecast, knocking down Henry Hub prices for 2020 another 11 cents from the previous outlook to $1.93. In the latest Short-Term Energy Outlook (STEO), EIA said it expects the Henry Hub price to average $3.10 in 2021, 2 cents higher than forecast in the previous STEO, as falling production levels continue to exert upward price pressures.

In a note to clients on Wednesday, Enverus said that after bottoming in May, natural gas pipeline data indicates that production has started to flatten, and in some areas, has shown gains. The pipeline sample, which represents 74% of the total gas produced in the United States, declined from 71 Bcf/d in January to 65.7 Bcf/d in May. As of June 23, production averaged 65.1 Bcf/d.

Pipeline scrapes show gas production June to date in some key plays trending higher compared to May, including in Appalachia and the Permian, Anadarko, Powder River and Williston basins.

“Despite these gains, production for the U.S. is still down in June,” Enverus analysts said. “However, it shows how U.S. operators can be resilient even during times when most of these areas are not economical.”

After plunging deep into negative territory in April, higher WTI prices have incentivized some producers to turn back on the taps. However, Enverus pointed out that this price level still leaves only a handful of areas with gas breakevens under $5/MMBtu, most predominantly in the Marcellus/Utica and Haynesville shales.

Nevertheless, the risk of ending the traditional storage season at “significantly” above-average levels is high, Enerverus said, due to expectations that demand destruction from Covid-19 mitigation efforts would initially outpace production shut-ins. Lower 48 inventories already are tracking well ahead of historical levels, sitting at 3.012 Tcf as of June 19, which is 466 Bcf above the five-year average, according to EIA.

However, by the start of the withdrawal season, and with production declines taking hold, storage inventories may decline rapidly as demand normalizes and the winter season gets under way.