Exploration and production (E&P) companies are on the prowl for mergers and acquisitions (M&A), with U.S. supermajors able make some big deals if they are inclined, Goldman Sachs analysts said Thursday. 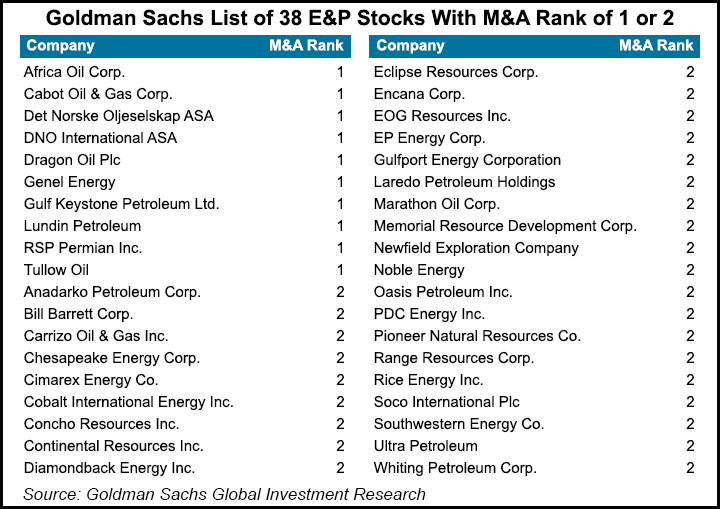 With the shift from resource constraints to abundance, finding a route to a lower breakeven portfolio has become the “new oil order,” said Goldman’s Ruth Brooker and her colleagues. They conducted an analysis of the top 420 E&Ps based in the United States and overseas.

“We believe M&A can provide one route to a lower breakeven portfolio and see 10-15 million b/d of production which can be transferred” through mergers.

The oil majors are well positioned, she said, with an estimated “$150 billion of firepower that won’t stretch their balance sheets.” They also have the ability to defer about $325 billion of capital expenditures on marginal projects, “which can be redirected toward acquisitions.”

U.S. supermajors hold around $80 billion of the ammunition, with European-based majors with about $70 million. The majors are at the top of the buyers’ list because they are meaningfully underexposed to U.S. shale oil.

The majors “own only 5% of the total U.S. shale oil resources based on our Top 420 analysis, despite it being the biggest area of supply growth and productivity improvements on a global basis,” Brooker said. And they need to “buy materiality” because their average reserve replacement has been below 100% for the past five years.

ExxonMobil Corp. could make a deal for as much as $40 billion, while Chevron Corp. would have $26 billion to spend. ConocoPhillips, the top independent, has about $14 billion available. Of the European-based supermajors, BP plc has up to $36 billion, despite the Macondo payouts.

The capital to buy would come from projects that could be deferred. As many as half of the 61 new pre-sanctioned projects worldwide are uneconomic at current prices, amounting to more than $750 billion of capital expenditures and 10.5 million b/d of cumulative peak production, according to Goldman. The main projects that have been or may be shelved are marginal offshore projects in Africa, heavy oil in Canada, marginal U.S. unconventionals and high-cost liquefied natural gas projects.

“We do not believe M&A within shale will be done by majors alone,” analysts said. “We see an active opportunity for intra-shale consolidation among E&Ps…Multiple shale plays have very fragmented ownership, particularly the Permian Basin, Marcellus Shale, Utica Shale and Denver-Julesburg Basin (Wattenberg/Niobrara play).

“We believe more companies are reaching agreement on our multi-year ‘shale scale’ thesis — that larger contiguous acreage positions are needed to drive superior execution and cost reduction. As such, we believe we will continue to see moves by existing shale players let alone those with lower quality shale assets to expand/enter shale.”

Also listed as among the most capital-constrained E&Ps with strong M&A appeal were, again, Continental and Range, as well as U.S.-based Memorial Resource Development Corp.