The U.S. ambassador to Germany reportedly warned that German companies working on Russia’s controversial Nord Stream 2 natural gas pipeline could be subject to sanctions, including disqualification from participating on projects. 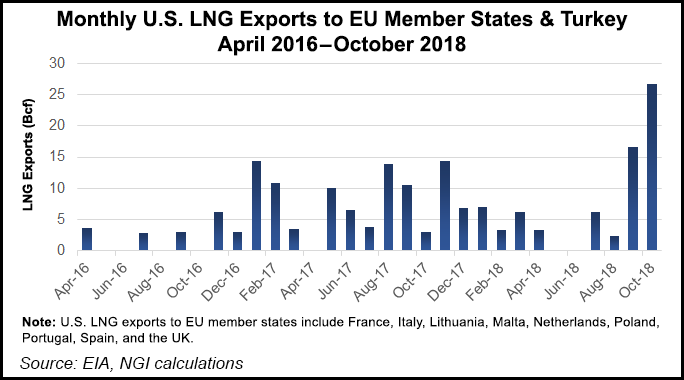 Ambassador Richard Grenell issued the warning to several German corporations over the weekend, according to reports. “We emphasize that companies involved in Russian energy exports are taking part in something that could prompt a significant risk of sanctions,” Grenell wrote.

Embassy spokesman Joseph Giordono-Schultz told the Washington Post on Monday that the U.S. government “has been clear that we agree with the European Parliament, the U.S. House and nearly 20 European countries in opposition to the Russian Nord Stream 2 project.” While German companies are free to work on the Nord Stream 2 project, Giordono-Schultz said “we are free to make clear that working on it could disqualify them from also working on U.S. projects.”

German lawmakers and media outlets reportedly considered Grenell’s letter to be a threat, but Giordono-Schultz denied that characterization.

Germany granted authorization for Nord Stream 2 last March. The pipeline would have 1.94 Tcf (55 bcm) of transport capacity, and run 1,222 kilometers (759 miles) under the Baltic Sea. The pipeline would connect the Russian port of Ust-Luga, near St. Petersburg, to Greifswald in northeast Germany. It is expected to enter service this year.

Russia is now the biggest gas supplier to Europe through its pipeline system, but after it invaded Ukraine in 2014 and annexed Crimea, the United States and its allies sanctioned some Russian energy companies and executives. The sanctions, coupled with burgeoning Lower 48 gas supplies, have opened the door to more liquefied natural gas (LNG) imports to the continent.

During a North Atlantic Treaty Organization (NATO) meeting last July, Trump said Germany “is totally controlled by Russia because they will be getting from 60-70% of their energy from Russia,” and called Nord Stream”a very bad thing for NATO.” But when Trump appeared alongside Russian President Vladimir Putin days later, Trump said the United States “will be competing” against the pipeline.

White House officials last November said they wanted to help facilitate gas exports to Europe and urged European allies not to participate in Nord Stream 2 and another project, TurkStream, aka Turkish Stream. TurkStream would have 31.5 bcm (1.11 Tcf per year) of transport capacity and run 930 kilometers (577.9 miles) under the Black Sea. It would connect the Russian port of Anapa to Kikikoy, a village in northwest Turkey at the tip of the European continent.