The U.S. horizontal oil rig count is poised to drop by an estimated 65% amid the unprecedented effects of the oil price war and Covid-19 pandemic, according to a new analysis by Rystad Energy. 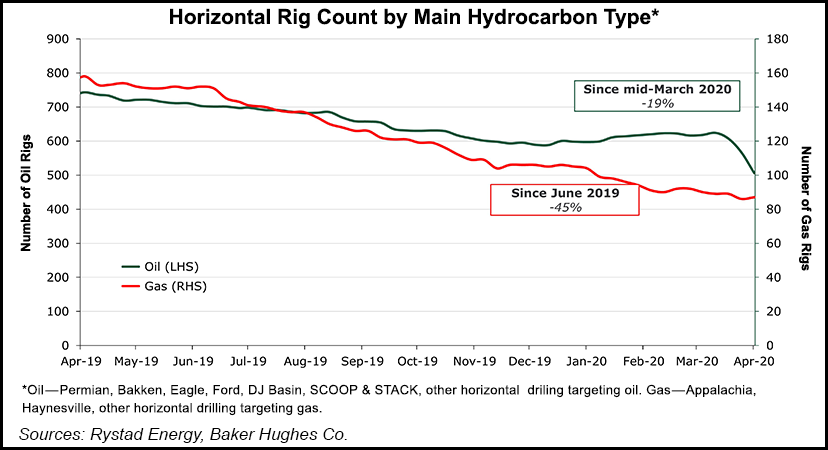 “From a peak of about 620 rigs in mid-March 2020, the oil rig count is forecast to free-fall to a potential bottom of around 200,” the Rystad team said Tuesday, citing guidance from exploration and production (E&P) companies. “Most of the anticipated decline will come already by the end of April. The horizontal rig count has so far dropped to roughly 500, falling by 19% from the recent apogee just three weeks ago.”

No basin is safe from the plunge in activity, analysts said, although some plays have felt more severe impacts than others.

The total rig count in Oklahoma’s South Central Oklahoma Oil Province (SCOOP) and Sooner Trend of the Anadarko Basin, mostly in Canadian and Kingfisher counties (STACK), is approaching 20 horizontal rigs, “a level never seen in the modern unconventional era (since) 2011.”

In the Bakken Shale, “rig activity remains more robust in relative terms, but rig counts are also already down to the low 40s — a level last seen in May 2017,” analysts said.

In the Permian Basin, rig activity in the oil-rich Delaware New Mexico and Midland North sub-basins is still little changed from the start of the year, while in the gassier Delaware Texas and Midland South areas, rig activity has already plunged to levels not seen since early 2017, the Rystad team said.

“Rig activity in the U.S. will inevitably extend its decline into the second quarter of 2020, regardless of how the global macro environment evolves in the short-term,” Abramov said. “This downturn is the real test of U.S. land industry endurance.”

The Rystad report follows the most recent Baker Hughes Co. rig count, which showed 664 active rigs in the United States, down from 1,025 rigs active in the year-ago period, with oil-directed rigs accounting for most of the decline.

In a related note also published Tuesday, Rystad analysts said at least nine of the world’s top exploration wells planned for 2020 are at risk of being suspended because of the gloomy market outlook.

The lost wells in the United States, Norway, Brazil, the Bahamas, Guyana, Gambia and Namibia would target an estimated 7 billion boe of resources, analysts said.

“Given the prevailing global situation we now foresee that the cumulative discovered volumes by the end of the year could go even below the 2016 level of 8.9 billion boe, which was the decade’s lowest,” said Rystad’s Palzor Shenga, senior upstream analyst. “This will depend upon how many key wildcat wells will still see a spinning drillbit in the coming months, as some of them could be either suspended or postponed.”

Discovered volumes in the first quarter of 2020 totaled around 2.5 billion boe, off about 40% from the similar 2019 period, with natural gas accounting for slightly more than half of the volumes, the Rystad team said.

Wood Mackenzie upstream researcher Rob Morris, meanwhile, is forecasting that $110 billion of upstream investments planned for this year “will almost certainly be deferred, with another $100 billion at risk.”