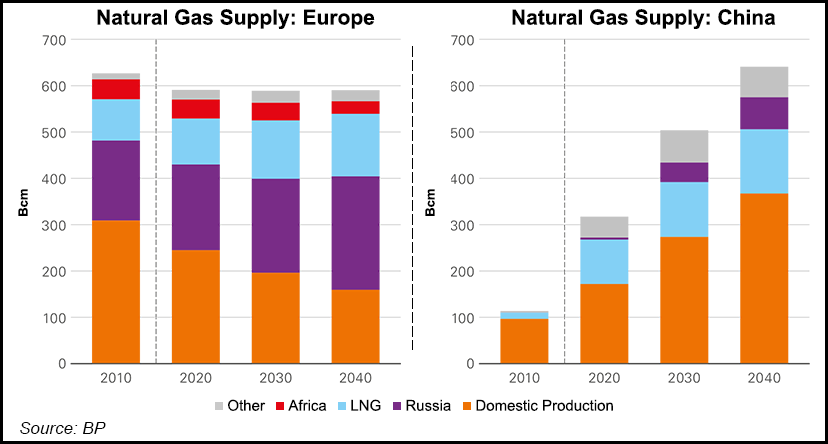 The annual Energy Outlook, overseen by chief economist Spencer Dale, offers an in-depth analysis and forecast of fossil fuels, renewables and emissions over the next 20-plus years.

As it has for several years, BP again predicted gas demand would outpace oil and coal to 2040.

“Growth in gas demand is widespread, increasing in almost every country and region considered,” Dale said, “driven in broadly equal amounts by use in power and industry. Transport records the fastest growth, albeit with small volumes.”

LNG exports increase significantly in the forecast, led by the United States and Qatar, which in turn fosters a more competitive and globally integrated market. In the ET scenario, the gas export trade more than doubles, reaching almost 31.8 Tcf in 2040, up from about 14.1 Tcf in 2017.

As the global energy system evolves, “the pattern of energy supply is also changing, with the shale revolution catapulting the U.S. to pole position as the world’s largest producer of oil and gas, and the rapid growth of LNG transforming how natural gas is transported and traded around the globe,” Group CEO Bob Dudley said.

North America is seen leading the way on LNG exports, followed by the Middle East, Africa and Russia. As the market matures, the United States and Qatar emerge as the “main centers of LNG exports, accounting for around 40% of all LNG exports by 2040.”

The dominant market for gas exports still is Asia in 20 years, although the pattern of imports shifts, with China, India and other Asia countries overtaking the more established markets of Japan and Korea, and accounting for around half of all imports by 2040.

Europe also remains a key LNG market, both as a balancing market for supply and a key hub of gas-on-gas competition between LNG and pipeline gas, mostly from Russia.

The precise profile of LNG growth, however, depends on the timing and availability of new investments that would be needed to finance a considerable expansion, according to Dale.

“The cyclical nature of LNG investments means there is a risk that the development of the LNG market will continue to be associated with periods of volatility.”

The ease of transportation via pipeline gives it a marked cost advantage over LNG, but the main constraint may be concerns about Europe’s dependency on Russia for gas. In the ET scenario, a globally integrated gas market would reduce these concerns, allowing Russia to increase only slightly its share of European gas demand.

Globally, the United States is seen as having no peer in gas production through 2040. Qatar and Iran also are among the biggest producers, and the two countries together should account for almost 50% of output growth to 2040.

In the ET scenario, industrial gas demand, accelerates, while power sector growth slows. The share of gas in the global power sector remains relatively stable at about 20%. Among the major gas producers, only North America experiences an increase in gas use, which would come at the expense of coal.

“Demand for oil and other liquid fuels grows for the first part of the outlook before gradually plateauing,” economists said. “The increase in liquids production is initially dominated by U.S. tight oil,” but production by members of the Organization of the Petroleum Exporting Countries subsequently increases as domestic tight oil declines.

Renewables are forecast to be the fastest growing energy source over the next two decades, with an annual gain of 7.1% and accounting for half the growth in global energy, with its share in primary energy rising to 15% by 2040 from 4% today.

“The outlook facing major energy providers, like BP, is both challenging and exciting,” Dudley said. “One of the biggest challenges of our time is a dual one: the need to meet rising energy demand while at the same time reducing carbon emissions.

“The emissions-reduction side of this dual challenge will mean shifting to a lower-carbon energy system, as the world seeks to move to a pathway consistent with meeting the climate goals outlined in the Paris Agreement,” the United Nations global climate accord.

The value of the energy analysis “is not in trying to predict the future,” Dudley said. Rather, it provides a “structure and discipline to our thinking and decision making. It helps us gauge the range of uncertainties, judge how the risks can be managed and determine how best to encourage change that puts the world on a more positive and sustainable path.”

In the main scenario, an improvement in living standards causes global energy demand to increase by around one-third to 2040, driven by India, China and other Asian nations, which together account for two-thirds of the increase.

BP’s economics team produces two annual reports. The Energy Outlook, first published in 2011, is forward looking, while The Statistical Review of World Energy since 1965 has analyzed data from the previous year.

The largest revisions to the ET scenario relative to last year’s outlook were to renewable energy and industrial demand in China. Overall energy demand was revised down slightly, less than 1% in 2040, “but this masks larger revisions across different fuels, regions and sectors,” Dale noted.

By fuel, the largest revision was the increase in renewable energy, up 9% in 2040, offset by downward revisions to oil, coal and nuclear.