Wholesale propane prices at the main U.S. natural gas liquids (NGL) hub have reached their highest level in more than seven years amid tight global supply and strong demand, according to the latest government figures. 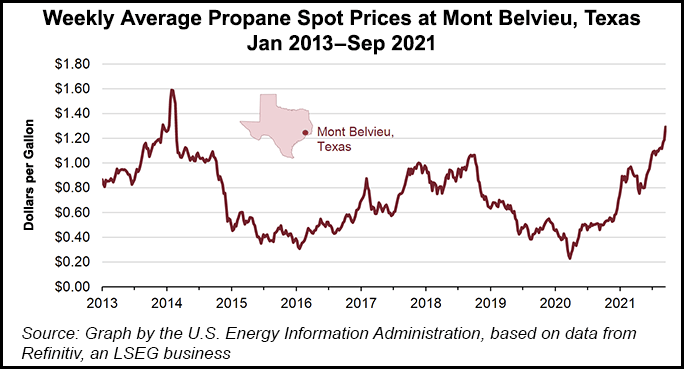 EIA researchers Josh Eieermann and Warren Wilczewski noted that along with the rise in exports, U.S. propane prices have increased in line with propane prices in overseas markets. Propane prices in Northwest Europe and East Asia have more than doubled in the past year, according to the EIA team.

“Because Northwest Europe and East Asia are net importers of propane, which is used in both markets for domestic space heating and as a petrochemical feedstock, the supply and demand imbalance has driven up prices in both regions as importers aim to secure supplies,” they said.

U.S. exports of propane in the first six months of 2021 accounted for 60% of total U.S. propane demand when combining domestic consumption and exports, according to the researchers. This marked an increase from 58% in the first half of 2020.

The EIA team forecast net exports of hydrocarbon gas liquids from the United States to “remain high through the end of the year and then gradually decline” as crude oil production from the Organization of the Petroleum Exporting Countries and its allies rises. This should result in increased global production of associated propane and other natural gas plant liquids, researchers added. The rise in global production, in turn, would limit additional demand for U.S. propane exports and keep domestic net propane exports close to 1.2 million b/d in 2022.

Meanwhile, imports of propane from Canada have decreased this year because producers have developed new export outlets where propane can be exported from the country directly to major importers in the Pacific Basin by tanker. Two export terminals have been completed in British Columbia: the AltaGas Ltd. Ridley Island Propane Export Terminal and the Pembina Corp. Prince Rupert Terminal. Together, the facilities can export more than 70,000 b/d of propane overseas, rather than into the U.S. Midwest by rail.

The interconnection of the U.S. and global propane markets is similar to the increasingly intertwined natural gas markets. U.S. natural gas is currently trading above $5/MMBtu amid robust global demand from Europe and Asia. The two markets have competed for supply throughout the summer as they work to rebuild storage inventories after a harsh winter that was followed by a hot summer.