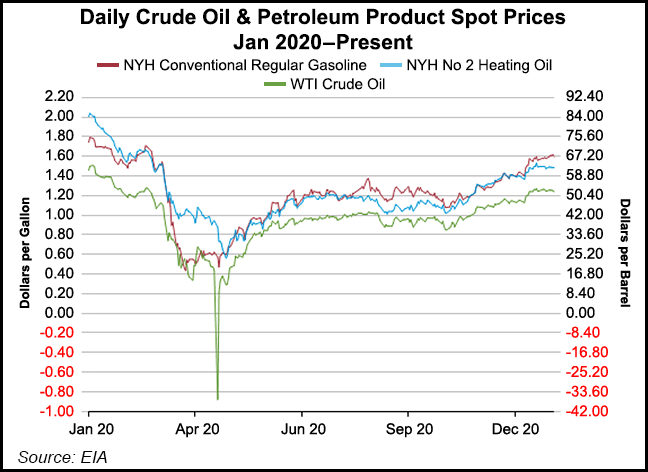 Demand has proven choppy week/week over the last several months, but it has consistently been well below year-earlier, pre-coronavirus levels because of travel restrictions and generally lower mobility levels amid the ongoing pandemic.

Domestic commercial crude inventories for the week ended Jan. 29, excluding those in the Strategic Petroleum Reserve, decreased by 1.0 million bbl from the previous week. At 475.7 million bbl, EIA said, oil inventories were 4% above the five-year average.

Demand, meanwhile, fell 6% week/week for the latest covered period, according to the WPSR, and it was 11% below year-earlier levels. Compared with the same week in 2019, jet fuel consumption was down 55% and gasoline was off 13%.

U.S. crude production, meanwhile, averaged 10.9 million b/d during the covered week, on par with the previous week but well below the 2.0 million bbl/d level a year earlier, EIA said.

Production was also far lower than the 2020 peak of 13.1 million b/d reached during the week ended March 13, according to analysts at ClearView Energy Partners LLC. All of that noted, the ClearView analysts pointed to one potential indicator of recovery: the EIA data showed U.S. jet fuel demand averaged 1.1 million b/d over the first four weeks of 2021, 2% above the average level of 4Q2020.

Meanwhile, the Organization of the Petroleum Exporting Countries and its allies, aka OPEC-plus, on Wednesday culminated a monthly policy meeting by maintaining its production targets. The cartel had previously called for its members to keep supply levels steady this month, with the exception of leader Saudi Arabia, which agreed to voluntarily trim output by 1.0 million b/d in February and March to offset continued light global demand.

Following the virtual meeting, members of the OPEC-plus policy committee said they would remain “flexible” with production targets in coming months, depending on the effectiveness of coronavirus vaccines, economic activity and oil demand.

The committee members also noted that, “while economic prospects and oil demand would remain uncertain in the coming months,” they viewed the gradual rollout of vaccines around the world as “a positive factor” for stronger demand in 2021.

The latest OPEC-plus estimate calls for global oil demand to increase by 5.6 million b/d this year, following an estimated decline of 9.2 million b/d in 2020, according to the group’s Joint Technical Committee, which also met during a virtual meeting this week.