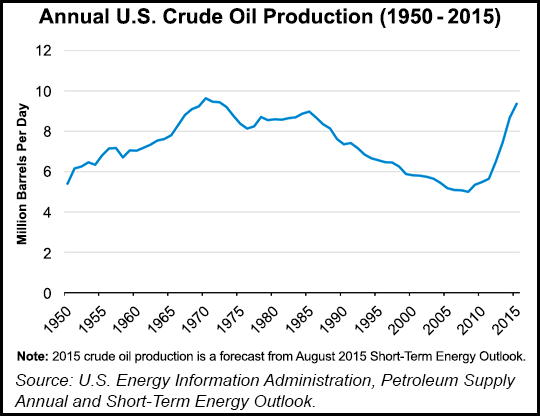 Industry sources quickly seized on the study as further support for Congress to lift decades-old restrictions on crude exports, calling them outdated and anti-competitive in the global markets.

“Petroleum product prices in the United States, including gasoline prices, would be either unchanged or slightly reduced by the removal of current restrictions on crude oil exports,” EIA researchers concluded.

Global crude prices would not be impacted by U.S. supplies with or without a lifting of the current export restrictions, according to EIA. “Other factors affecting global supply and demand will largely determine whether global crude prices remain close to their current level.”

“Current policies restrict, but do not ban, crude oil exports, and they are also assumed to allow exports of API (American Petroleum Institute) 50+ material that is processed through a distillation tower,” EIA noted.

API officials in Washington, DC, called the EIA analysis “a final, nonpartisan confirmation” that 1970s-era trade restrictions are bad for American consumers. “America is now a global energy superpower, and we should not have trade policies that make it harder for the United States to compete,” said a spokesperson.

API noted that “strong, bipartisan” legislation is being considered in both houses of Congress, and elected officials need to make the issue of exports “an immediate priority” when they return to work after Labor Day.