The U.S. oilfield services (OFS) and equipment sector added an estimated 7,450 jobs in December, according to the Houston-based Energy Workforce & Technology Council. 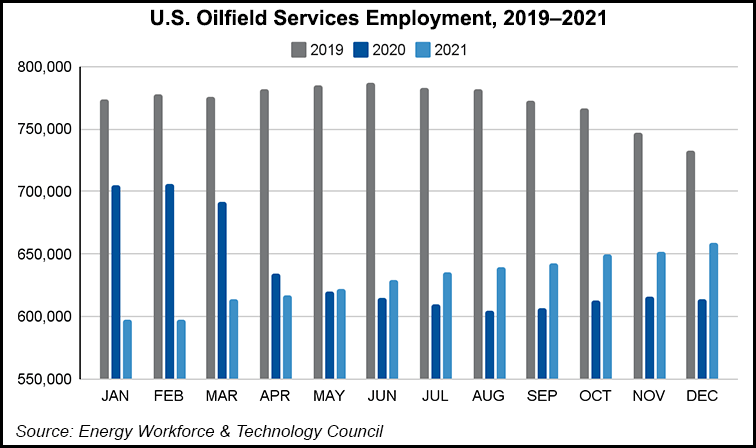 The Council said it observed growth in oil and gas extraction, as well as machinery manufacturing in December. Last month’s OFS employment grew “as overall U.S. job growth underperformed against” what analysts had predicted.

Partnering with the University of Houston’s Hobby School of Public Affairs, the Council determines domestic OFS employment figures based on U.S. Bureau of Labor Statistics data. Reviewing OFS employment changes during the past two years, the Council said the number of pandemic-related job losses peaked at more than 109,000 last February. Since then, an estimated 62,289 of those jobs have returned, the organization added.

“This brings the total pandemic employment losses to 47,172 jobs, resulting in $5.6 billion lost in annual wages,” the Council stated.

OFS employment increased at an average monthly rate of 0.6% in 2021 “as companies have maintained focus on reducing debt, repaying investors and investing in research and development.”