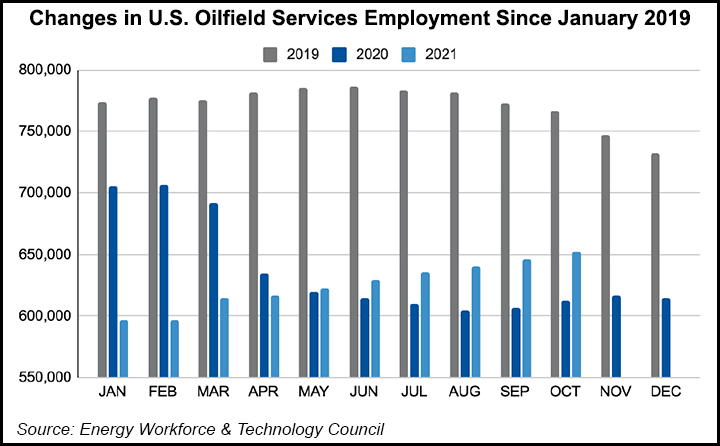 More than one-third of the new jobs in the three-month period — an estimated 6,051 positions — were added in October, marking the eighth straight monthly increase, the Council said.

“We’re pleased to see the increase in energy jobs, but many more are needed,” CEO Leslie Beyer told NGI’s Shale Daily. “Our highly-skilled workforce is ready and willing to continue the critical work of contributing to our country’s energy security, especially as winter draws near and global demand increases.”

The findings stem from a review of preliminary data from the U.S. Bureau of Labor Statistics (BLS) by the Council and researchers at the University of Houston’s Hobby School of Public Affairs.

The Council, which has represented the oilfield services (OFS) industry for decades, noted that its 450-plus member companies are engaged in energy equipment manufacturing, drilling, well completions, well services, pressure pumping, renewable energy technology and servicing, geothermal development and other areas.

According to the latest report, the energy services and technology sector has gained nearly 55,000 jobs since March. In February, the sector’s workforce hit a Covid-19 pandemic low of 597,067 jobs based on BLS data, the Council said.

For the year to date, energy services and technology employment has typically grown 0.99% each month, the Council noted. It pointed out that “companies have maintained focus on reducing debt, repaying investors and investing in research and development.” Moreover, elevated Covid-19 cases tied to the Delta variant “have increased uncertainty for demand and production forecasts.”

In its review of year/year state-level employment from October 2020 to last month, the Council estimated that Texas, with the most exploration and production activity, also gained the largest number of jobs at 19,340. That brought the state’s latest sector job count to 316,444.

The Council’s year/year figure was lower than the 22,000 job services sector increase from September 2020 to September that was reported by the Texas Independent Producers and Royalty Owners.

According to the Council, major trends across the services sector include deploying all-electric hydraulic fracturing fleets, confronting stretched supply chains and inflationary pressures and greater use of multi-well pad drilling.