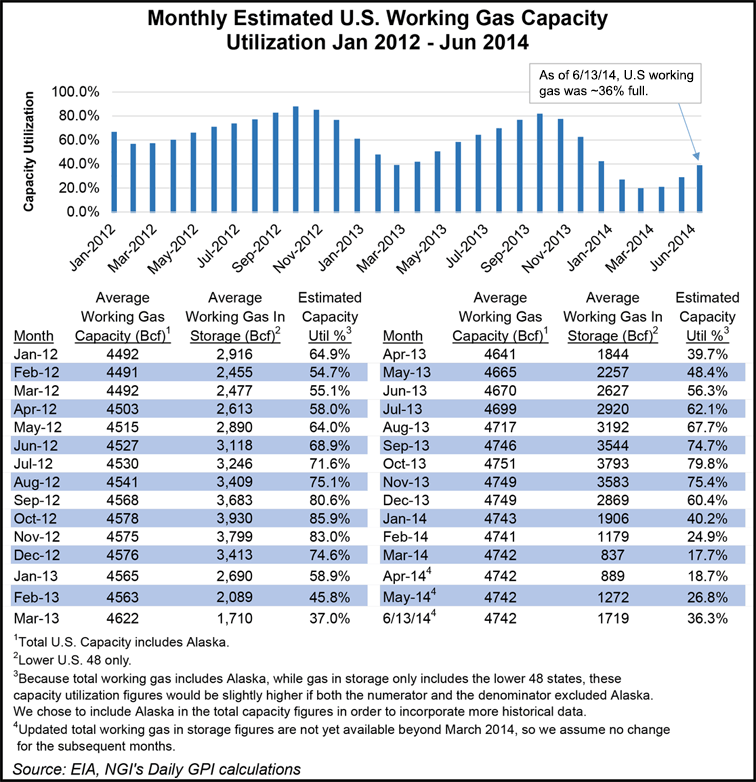 The question the markets were asking in April was whether the system could inject close to 3 Tcf in 210 days, and if so, how far above $5.00/Mcf would prices have to go, noted analyst Jan Stuart. He discussed the prospects for domestic natural gas during a conference call regarding commodities on Monday.

“After barely two months and an unprecedented string of five consecutive greater-than-100-Bcf-per-week storage injections, we think that the answer is a qualified ‘yes,’ and that it can be done without prices getting out of their current range between $4.40 and $4.90, unless summer weather turns extremely severe fast and lingers well into the shoulder season.”

The reasoning is clear, he said. The domestic gas markets appear to be solving the pre-winter inventory fill, with production tracking about 2.6 Bcf/d higher than last year. Power generation demand for gas should track about 2 Bcf below 2013. There’s also a much smaller shift in industrial demand (0.4 Bcf/d higher), Mexico exports (0.3 Bcf/d higher) and marginally lower imports, which complete a residual value of 4 Bcf/d, “meaning that, net of weather trends, storage can fill 28 Bcf per week faster than last year.”

The Energy Information Administration last Thursday estimated a 113 Bcf storage build for the week ended June 13, about 3 Bcf above expectations (see Daily GPI, June 19). That injection brought gas in storage to 1.719 Tcf, or 706 Bcf below the year-ago level.

Credit Suisse analysts “remain upbeat about the very near-term part of the Henry Hub gas futures curve,” but “we also still think that the story will turn normal to the point of boring next winter,” Stuart said.

BNP Paribas analyst Teri Viswanath, who directs natural gas commodity strategy, said Monday the market underestimated seven out of the last eight storage releases and “it would appear that the six consecutive triple-digit weekly injections are weighting down prices.

“Indeed, with more than half of the injection season left, it appears that the industry has a shot of surpassing the prior record of ten triple-digit weekly injections set back in 2001,” she said. However, “restocking fatigue” could settle in.

“The problem of sustaining any downward momentum for further price declines is that the pace of storage injections inevitably falters in the second half of the season,” Viswanath said. “Based on our estimates of injections thru the end of the first half of the season, a 90% restocking effort would result in just 3.3 Tcf of working gas in storage by end October.”

Barclays Capital’s Shiyang Wang, Christopher Louney and Michael Cohen also weighed in Monday, noting the market was unlikely to return storage to the five-year average (3.8 Tcf) by the end of October. They raised their 2014 price forecast by a nickle to $4.54/Mcf.

Storage should “continue to at least narrow compared with last year’s level throughout the rest of the injection season” to finish at about 3.4 Tcf, said the trio. “The key question is, will storage ever catch up? In our view, as we reset our expectations for weather to return to normal for 2015, storage should finally return to ‘normal’ next year despite the tightening underlying demand factors.”

Citing a slow refill and increased switching to gas by generators, Moody’s Investors Service last week raised its gas price assumptions 13% for the rest of the year to $4.50/Mcf. The price assumptions are used to evaluate producers’ financial status to assign a credit rating.

“Natural gas prices in North America, meanwhile, will get a continued boost from a slow refill of underground storage following a severe winter,” Moody’s analysts said. “Prices will rise sharply if producers fail to fill storage to about the 3.5 [Tcf] level during the refill season.”

Spot prices will benefit from storage injections while growing gas production in the onshore should keep a cap on prices, according to Moody’s. Analysts also believe power producers are the “greatest market for natural gas in North America,” and they will increase their demand gradually “as new environmental regulations take effect.”

Moody’s raised its 2015 gas price assumptions by 6% to $4.25/Mcf but left intact the long-term assumption of $4.00. “Natural gas prices in North America will rise eventually, with demand from new petrochemical plants and the start-up of facilities to liquefy and natural gas for export, but not until later this decade,” Moody’s team said.

Oil prices, however, are expected to be extremely volatile in light of the Middle Eastern turmoil, said Raymond James & Associates Inc. analysts on Monday. Former bears J. Marshall Adkins, Pavel Molchanov, Cory J. Garcia and John Freeman contributed to a note on why they were raising their oil deck.

“Over the past two years, we have been bearish on global crude oil prices due to our expectations for rising U.S. oil supply and sub par global oil demand growth,” they said. “During these same two years, Brent oil prices have stubbornly held in the $100-plus range despite higher-than-expected U.S. oil supply growth and modest global demand growth.

“So, what have we missed? The simple answer is massive oil supply interruptions from OPEC countries.” Since the beginning of 2012, they said OPEC oil supply has fallen by more than 2 million b/d.

“More importantly, ongoing events in Iraq (which had been the fastest growing OPEC producer) now bring into play the risk of even more potential supply interruptions.”

“Put simply, we think the uncertainty of Middle East oil supply is much greater today than any time in the last several decades,” said the Raymond James team. “Layer in U.S. oil price uncertainties created by the U.S. oil export restrictions, and the uncertainty of oil price movements (either up or down) over the next few years is higher than we can remember.”