The North American Energy Standards Board (NAESB) has unanimously approved an initiative to improve coordination between the natural gas and electric markets in response to Winter Storm Uri in February. 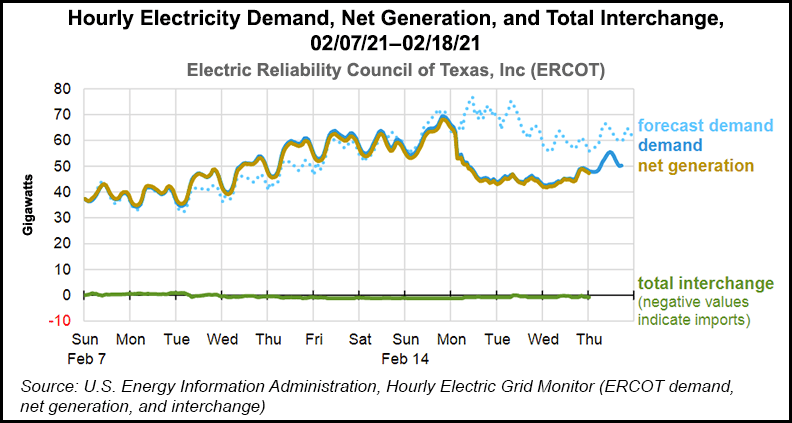 The cold snap caused widespread power outages and shut-in oil and gas production across the south-central United States. Gas-fired generation accounted for 58% of all unplanned outages, according to a joint enquiry led by FERC and the North American Electric Reliability Corp., aka NERC, whose findings were made public in November.

The effects of Uri also reverberated beyond the United States, with gas buyers in Mexico impacted by price spikes and supply shortages during the cold snap.

Vulnerability to a repeat event this winter “clearly is a top-of-mind issue for many customers because many of them were exposed to shutdowns due to lack of physical availability,” said Igasamex’s Carlos Arriola, director general, last month at the U.S.-Mexico LDC Forum in San Antonio, TX.

NAESB, an industry forum comprising about 300 energy companies, said its Gas Electric Harmonization Committee had been meeting since June to discuss potential activities that the group could undertake to complement the joint inquiry.

NAESB Chairman Michael Desselle said he appreciated that the board “endorsed this standards project and determined to place the item on all three quadrant annual plans with a goal of initiating the development of new and enhanced gas and electric coordination business practices early next year.”

The board, said Desselle, “recognized our role as a forum well suited to facilitate communication between market entities, and with 30 years of standards development experience and 20 years of market coordination experience, I am confident that the organization will be able to adopt standards for consideration” by the Federal Energy Regulatory Commission in 2022.

The new standards development project “is intended to build upon NAESB’s existing body of standards and focus on commercial information sharing between critical parties during impending extreme weather-related operating conditions,” the group said.

NAESB is working with FERC, NERC and the National Association of Regulatory Utility Commissioners to align its efforts with the recommendation included in the November report.

“As a unique industry forum that convenes wholesale and retail natural gas and electric market participants, regulators, and other interested parties to develop business practice standards that underpin the commercial transactions of the markets, NAESB has a long history of working with its members and non-members in this area,” the group said.

NAESB’s existing coordination standards “define communication protocols between interstate pipelines and gas-fired power plants concerning fuel requirements and operational issues that may impact gas delivery and have served as the basis for several subsequent standards development efforts initiated by the FERC and reports published by the National Petroleum Council.”

The announcement follows the adoption of rules by the Railroad Commission of Texas to ensure adequate natural gas supplies for the state in future weather emergencies.