In an extensive 313-page report, federal regulators have concluded that natural gas-fired generators made up 58% of all unplanned outages, derates or failures to start during the deadly cold weather event in February. 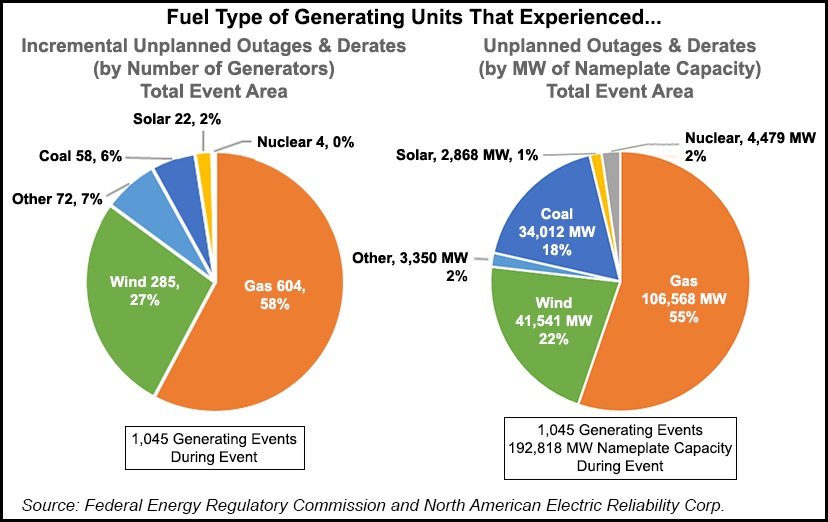 The remaining portion of outages was by wind (27%), coal (6%), solar (2%) and other generation types (7%), according to the final report prepared by FERC, the North American Electric Reliability Corp. (NERC) and the six regional entities that make up the organization. Four nuclear units made up less than 1% of the outages, derates and failures to start during Winter Storm Uri.

“The final report on Winter Storm Uri is a sobering analysis that highlights the significant work that needs to be done,” said Federal Energy Regulatory Commission Chairman Richard Glick. “I previously committed to take the recommendations seriously, and I plan to do exactly that.

“The devastating effects of extreme cold on our bulk power system’s ability to operate in 2011 and now, 2021, must not be allowed to happen again. We have a duty to protect the bulk power system and public safety, and we will do just that.”

The extreme weather event, which sent temperatures across Texas plunging into the single digits for several days, resulted in the largest manually controlled load shedding event in U.S. history, according to the federal agencies. The Electric Reliability Council of Texas (ERCOT) ordered a total of 20,000 MW of rolling blackouts in an effort to prevent a complete collapse of the electric grid. More than 4.5 million people in Texas lost power, some for as long as four days.

The Southwest Power Pool (SPP) and Midwest Independent System Operators (MISO) also faced challenges in balancing rising load with rapidly decreasing generation. SPP averaged 20,000 MW of generation unavailable (based on expected capacity) from Feb. 15-19. MISO South averaged 14,500 MW of generation that was unavailable from Feb. 16-18. As a result, each had energy and transmission emergencies, according to the report.

However, unlike ERCOT, which may only import slightly more than 1,000 MW over its direct current ties, SPP and MISO were able to import power from other electric grids to make up for increasing load levels and generation shortfalls. SPP and MISO are part of the Eastern Interconnection, one of the two major alternating-current electric grids in North America.

FERC’s analysis found that a combination of freezing issues (44.2%) and fuel issues (31.4%) caused 75.6% of the unplanned generating unit outages, derates and failures to start.

Notably, researchers said protecting only four types of power plant components from icing and freezing in the ERCOT region could have reduced outages by 67%. Outages could have been reduced by 47% in SPP and 55% in the MISO.

Meanwhile, 81% of the freeze-related generating unit outages occurred at temperatures above all the units’ stated ambient design temperature, according to researchers. In addition, 87% of the fuel issues were related to natural gas, predominantly related to production and processing issues. Another 13% involved issues with fuels such as coal or fuel oil.

Natural gas fuel supply issues were caused by gas production declines, with 43.3% said caused by freezing temperatures and weather. Another 21.5% were caused by midstream, wellhead or gathering facility power losses, which could be attributed either to rolling blackouts or weather-related outages such as downed power lines, according to the report.

“Extreme weather events, such as the one in February 2021, are unfortunately becoming more commonplace and the electricity ecosystem needs to come together to plan for and prepare to operate under more extreme, longer duration and wide area weather events,” NERC CEO Jim Robb said.

“The FERC-NERC-Regional Entity Staff Report also highlights the need for substantially better coordination between the natural gas system and the electric system to ensure a reliable supply that nearly 400 million people across North America depend upon to support their way of life.”

FERC and NERC outlined recommendations in response to the “continued failures of generating units due to freezing issues.” The recommendations include revisions to the NERC Reliability Standards surrounding generator winterization and gas-electric coordination. FERC and NERC had issued preliminary findings in September.

In the final report, the two groups recommended a revision to the mandatory Reliability Standards that would require generator owners to identify and protect cold weather critical components. Under the recommendations, generator owners also would be required to retrofit existing generating units. When building generating units, generators would need to operate to specific ambient temperatures and weather based on extreme temperature and weather data, and account for effects of precipitation and cooling effect of wind.

Annual training on winterization plans, as well as the development of corrective action plans also would be required as part of the revised standards.

In addition to revising the Reliability Standards, additional recommendations were made regarding topics that included cold weather impacts on mechanical and electrical components, utilizing weather forecasts to better predict electric demand, and increasing the ability to rotate rolling blackouts.