Oil and natural gas dealmaking activity in the United States during third quarter ended a strong note, with transaction values totaling $122.8 billion, the highest since a record high $125.7 billion in 3Q2014, according to PwC. 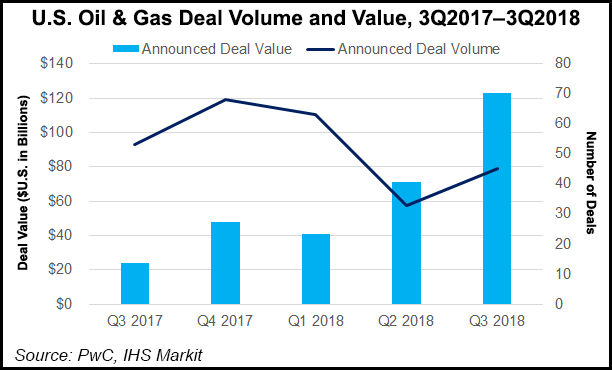 Deal volumes were slightly higher sequentially and within the historical averages, but deal value on average hit record highs, the consultancy said in an analysis of energy sector transactions. Most (82%) of the values in the quarter were driven by huge affiliate mergers by midstream operators, which all together accounted for about $80.7 billion.

Several midstream operators collapsed their master limited partnership (MLP) structures to simplify corporate structures, a trend that began earlier this year and has continued in 4Q2018.

In addition, two mega upstream deals in the onshore accounted for $19.5 billion during the quarter, one by BP plc and one by Diamondback Energy Inc., which rounded out the biggest transactions of the period.

“Mega deals and affiliate transactions, that’s the story of the 2018 third quarter,” said PwC’s Joe Dunleavy, deals leader for U.S. energy, utilities and mining. “But, will dealmakers remain satisfied with the thrill of a tax restructuring, or will strategic acquisitions bring the sizzle back to dealmaking activity and drive deal value to levels not seen in multiple years? Probably both.”

Upstream acquisitions drove most of the volume at 27 (60%), led by the BP and Diamondback acquisitions.

Shale and tight asset transactions continued their upward trajectory, with the Permian Basin regaining the lead at five upstream deals worth $11.5 billion, after giving way to the Bakken and Marcellus shales in 2Q2018.

Twenty-one upstream unconventional deals in the quarter brought in $19.17 billion, contributing 78% of the volume and 61% of the value.

Bakken Shale activity led activity in 2Q2018, but the Permian vaulted back to the top with five transactions valued at $11.55 billion. The Bakken was second with four deals worth $582 million, followed by the Niobrara formation with three worth a total of $460 million.

“Stronger and more stable commodity prices,” along with renewed optimism about the outlook for the sector, buoyed dealmaking for both volume and value of the announced deals, PwC noted.

“Strategic and financial investors alike are seeking the opportunity to deploy bone dry powder, whether in the form of cash or stock, to secure long term returns and cash flow. Corporate restructurings continue to significantly contribute to deal activity.”

Investors appear to be warming to the idea of longer term investments, said PwC’s Seenu Akunuri, U.S. oil and gas valuation leader. “Valuations have become advantageous enough for strategic and financial investors to make additions to their portfolios, especially in areas that promote operational efficiency and significant future cash flow.”

Private equity (PE) made a big comeback to the arena in the quarter, mostly targeting midstream assets, as well as “making geology bets” in the upstream sector.

The oilfield services (OFS) and equipment segment, along with the downstream, remained subdued, with only three deals each for the quarter. OFS transactions generated $878 million in deal value, while the downstream contributed $717 million.

In its 3Q2018 report regarding only U.S. upstream oil and gas merger/acquisition activity, DrillingInfo said dealmaking surged 250% sequentially, breaking records that date back to the final three months of 2012.