Midstream infrastructure in the United States continues on a steady growth cycle, but it still could require more than $200 billion of additional investment by 2035 as domestic production expands, according to an analysis by Deloitte Center for Energy Solutions. 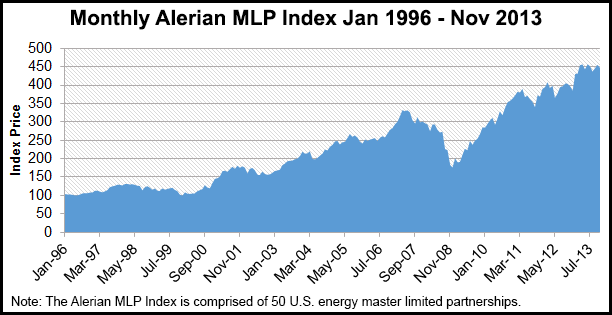 “The Rise of the Midstream: Shale Reinvigorates Midstream Growth” was presented Tuesday at the Deloitte oil and gas conference in Houston.

“The rise of the midstream sector is illustrated by the increase in its company valuations,” said Deloitte Vice Chairman John England, the oil and gas leader. “Nearly 25 midstream companies have an enterprise value in excess of $5 billion, up from seven companies in 2006.”

Rising oil and natural gas output has benefited exploration and production (E&P) companies, but “it also has fueled a demand for pipelines, gathering systems and processing facilities,” said the authors. “For decades, the midstream sector responsible for this infrastructure operated in the shadow of the E&P companies, but in the past seven years, the shale boom has enabled the midstream sector to come into its own.”

Between 2006 and 2012, midstream companies invested almost twice the amount of capital that they had invested between 1992 and 2006, according to Deloitte. “This investment has been acknowledged by the market, reflected in a threefold increase in midstream companies’ share of total U.S. oil and gas company enterprise value since 2005.”

By Deloitte’s calculations, the midstream sector is now the third-largest sector of the U.S. oil and gas industry, only behind supermajors and large independents. As proof, experts pointed to the largest midstream provider, Kinder Morgan Inc., with an enterprise value of $110 billion. It’s the third largest energy company in North America, bar none, the analysis found.

The midstream sector was just beginning a lull before shale production escalated, ending its “era of maturity,” said the authors. “After a wave of consolidation that began in the late 1990s, many forecasts predicted U.S. pipelines would be built out by about 2006. Before the shale boom, domestic oil and gas supplies had been in more accessible areas and tied to existing pipeline infrastructure. But now, increasingly high capital investment is being required to connect newfound resources with refineries and processing plants.”

The rise in midstream capital expenditures (capex) today is only beginning to meet the needs of E&Ps in some areas, like the booming Bakken Shale, where about one-third of gas production has to be flared or otherwise not marketed because of insufficient takeaway solutions (see Shale Daily, Nov. 8).

Meanwhile, thousands of miles away in South Texas, where Eagle Ford Shale output is exploding, “production is exceeding pipeline and storage capacity, and rail shipments are on the rise due to the current lack of pipelines,” according to the report. “Because of tight pipeline capacity, the use of rail, truck and barge to move crude nationwide is at its highest since the government began keeping records in 1981.

“Meeting these growing infrastructure needs may require more than $200 billion in additional investment by 2035.”

E&Ps without enough takeaway capacity have had to rely upon more costly and less efficient method to transport production from the wellhead. Deloitte estimated that from 2011 to 2012, the number of oil deliveries by truck to refineries jumped 38%, while rail shipments quadrupled and barge deliveries were up by more than half (53), said the authors.

Midstream operators’ reliance on rails, trucks and barges won’t be the preferred method of transport as more pipes are built, said the report.

“Until now, high crude price differentials between hubs have enabled shale producers to absorb the greater costs of alternative transportation. Bakken crude with landed cost at the northeastern United States, for example, traded at a significant discount to Brent prices because of midstream capacity constraints.

“In 2011 and 2012, that discount averaged $21.50/bbl, which was greater than the average rail cost of $15-16/bbl to the northeastern United States and U.S. Gulf Coast. New pipelines to the U.S. Gulf Coast, however, cut the Brent-Bakken discount to $11/bbl in early 2013, an indication that other forms of transportation may become too costly to be a long-term solution for a lack of pipeline capacity.”

There is some appeal for rail because of its flexibility, scalability and shorter-term contracts, said the authors. However, accidents like the September derailment in Quebec, where a train carrying a load of crude exploded and killed scores of people, highlight the risks of shipping crude by rail (see Shale Daily, July 9).

“Pipelines are also not a clear-cut winner for crude oil transit when considering their history of leaks and spills, as well as their initial investment cost. However, pipelines’ score on two of the most important aspects: cost and safety is generally considered to be higher than that of rail.”

The midstream sector can handle more capital investments in part because past growth hasn’t come at the expense of the balance sheet, said Deloitte. The master limited partnership “remains the bedrock” of the sector’s capital structure.

“The sector’s return on assets is comfortable, and average profit is three times greater than interest expense, despite its rising capex.” Distributions paid by midstreamers also have increased, “a sign the sector is not stretching its collective balance sheet simply to please investors.”

The Alerian MLP Index, which is composed of 50 U.S. energy MLPs, has — with the exception of the economic downturn five years ago — been mostly on the upswing for more than a decade, reaching $447.21 this month.