Domestic liquefied natural gas (LNG) exports have remained steady and are on track to finish the month well above year-ago levels as the market continues to be tested by word of new cargo cancellations and warning signs for what lies ahead. 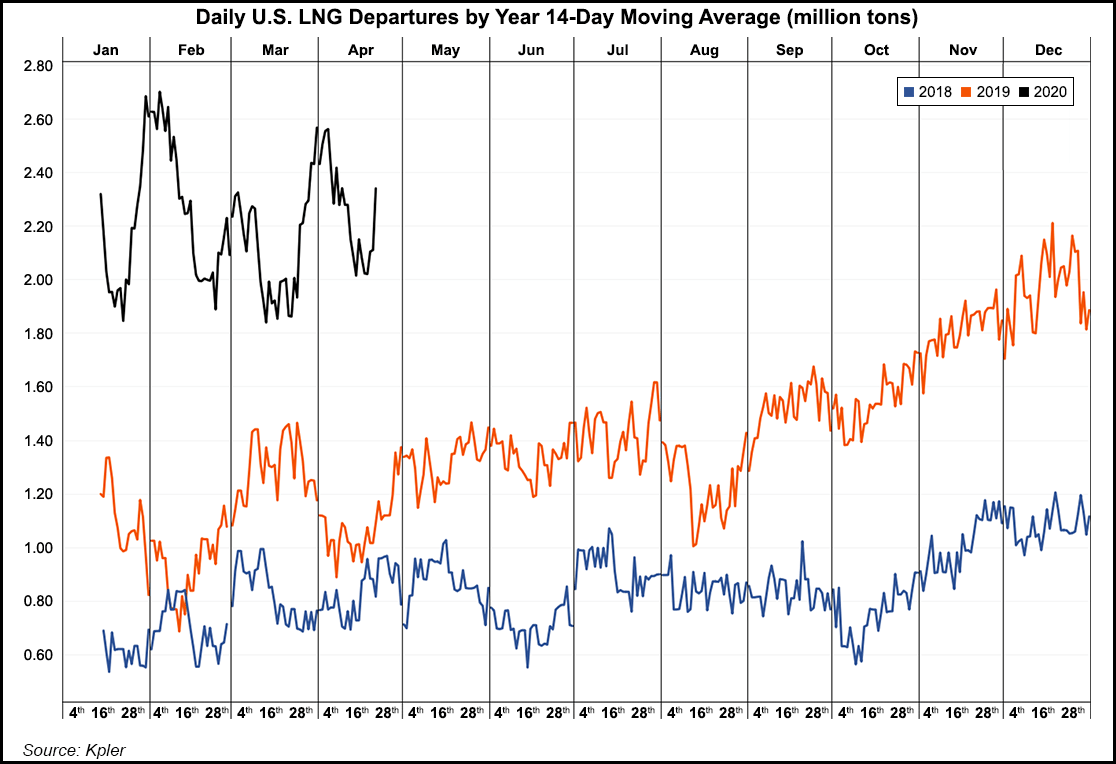 U.S. LNG departures have averaged 2.34 million tons (Mt) over the last two weeks, keeping within the middle of an export range that’s been in place since the start of the year, according to data intelligence firm Kpler. While more capacity has come online since 2019, the firm said loadings are set to finish April above 4 Mt, or 1.6 Mt higher than at the same time last year.

Kpler said Cheniere Energy Inc.’s Sabine Pass export terminal in Louisiana, the nation’s largest, continues to dominate export volumes with loadings of 1.9 Mt in March, or 40% of all Lower 48 loadings last month. However, that’s a big decline from the same time last year when the facility accounted for three-fourths of all loadings, Kpler said.

The LNG market was already oversupplied before the Covid-19 pandemic crushed demand worldwide and sent global gas prices into a freefall. Prices have converged and the market is in contango, a classic sign of oversupply and uncertainty.

The prompt Dutch Title Transfer Facility (TTF) finished Thursday at $1.915/MMBtu, while the UK’s National Balancing Point (NBP) closed at $1.707. Although Henry Hub fell to $1.815 Thursday after reaching $1.939 a day earlier, it was still among some of the world’s costlier gas. The Japan Korea Marker (JKM) spot price also set a record low on Thursday of $1.938.

LNG output also remains steady. NBP prices, for example, are facing pressure as demand falls and a fleet of seven Qatari LNG cargoes are headed toward the UK through May 11, said Schneider Electric analyst Balint Balazs.

The U.S. export terminals are underpinned by long-term take or pay contracts that have kept volumes flowing, but flexible destination clauses and the option in some contracts to cancel cargoes up to 60 days in advance makes it easier for U.S. offtakers to pay a liquefaction fee and not lift their volumes.

The maximum Gulf Coast LNG netback price for June delivery between the JKM, NBP and TTF on Thursday was $1.569/MMBtu, versus Henry Hub’s June settlement price of $1.942. That suggests domestic exports are out of the money, according to NGI data. Margins also look narrow through the remainder of the year.

The economics of taking cargoes from the U.S. overseas have also been clouded by an expected drop in associated gas production from oil wells, which could lift Henry Hub prices at a time when prices overseas are reduced by the pandemic. Most U.S. LNG supply contracts are tied to Henry Hub.

“U.S. exports are increasingly being put in a tricky spot as the forward curve for Henry Hub is upward sloping, making U.S.-sourced LNG less competitive at a time when Australian and Qatari volumes linked to Brent crude are becoming relatively cheaper,” said Evercore ISI analysts.

Shipbroker Poten & Partners said during a webinar on Wednesday it expects up to 25 cargoes for June loading to be canceled by domestic LNG buyers. Reports also have surfaced of cargo cancellations at both Cheniere facilities and at Freeport LNG.

“Spot cargoes will be the first to go when gas production declines inevitably limit LNG departures,” Kpler said Thursday. The firm said U.S. spot departures have moved higher over the past six months, finishing at 2.32 Mt in March, or 1.46 Mt higher year/year. Those volumes are facing challenges as 1.14 Mt of spot cargoes that have left the United States since last month have yet to tag a final country of destination, Kpler said.

The situation is testing other parts of the market as well. Cargo prices have remained weak and shipping rates could also fall further if vessel availability increases.

“As was widely anticipated, a significant number of cargoes for June loading in the U.S. have been cancelled leaving excess shipping length from portfolio players, utilities and traders,” said Norwegian shipbroker Fearnleys AS in a note on Wednesday. “In this environment we could see further rate drops as talks on potential production cuts continue.”

Evercore analysts noted that second wave LNG developers are being squeezed by the pandemic. Even before the arrival of the coronavirus, securing long-term supply deals with offtakers to underpin their facilities was being challenged by selective and cost-sensitive buyers in a market awash in cheap gas.

If the sales market “was on life support this winter, then it is flatlining this spring amid plummeting oil and Covid-19,” Evercore analysts Sean Morgan, Jonathan Chappell and Charles Yukevich wrote in a note this week. They also noted that management teams can’t even travel for in-person negotiations to secure offtake capacity.