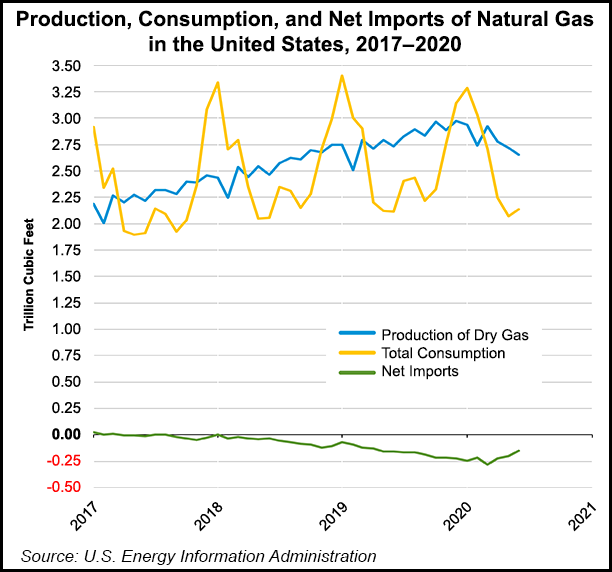 Total natural gas exports dropped by 6.1% to 11.3 Bcf/d, the first annual decline for any month since October 2014, researchers said in EIA’s August Natural Gas Monthly report released Tuesday. LNG had been driving the steady rise in total gas exports since 2016, they said.

Despite the declines, the average daily rate of total gas exports was the second highest for June since EIA began tracking monthly exports in 1973, researchers said.

The United States exported 3.6 Bcf/d to 17 countries in June, down from 27 in May, the EIA team said. About 46 LNG cargoes from the United States were canceled in June amid declining global demand for the fuel driven by the Covid-19 pandemic.

Net imports of LNG averaged minus 5.1 Bcf/d, meaning the United States was a net exporter for the month despite the steep decline in outbound cargoes. Total gas imports fell by 8% to 6.2 Bcf/d.

The EIA report follows the approval last week by FERC of the 10th and final unit at Kinder Morgan Inc.’s Elba Island LNG export terminal in Georgia. The authorization from the Federal Energy Regulatory Commission informally marked the conclusion of the first wave of domestic export projects that began in early 2016, when the first cargo was shipped from Cheniere Energy Inc.’s Sabine Pass terminal in Louisiana.

Exports via pipeline to Mexico have steadily risen despite the pandemic as well, as infrastructure on both sides of the border has gradually entered service, displacing LNG shipments.

Production Down, Consumption Up

Covid-19 continued to substantially impact domestic production in June, although consumption reached a record high, driven largely by increased gas use in the power sector, the EIA report said.

Demand from the power sector is poised for continued growth, as indicated in a separate EIA note published Tuesday.

“The closures will decrease the capacity of the U.S. coal fleet to less than 200 GW, more than one-third lower than its peak of 314 GW in 2011,” said researchers led by Mark Morey and Alex Gorski.