Where U.S. natural gas and oil exports are allowable they are surging, and as plans progress to carry liquefied natural gas (LNG) and more crude oil overseas, dramatic swings in the U.S. trade balance swiftly will transform America into an energy superpower, according to an in-depth analysis by Citi. 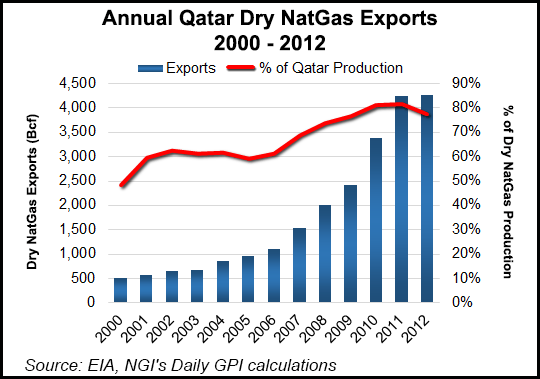 A team of macro analysts led by Global Head of Commodities Edward Morse issued a 96-page perspective this month on the outlook for domestic oil and gas, “Energy 2020: Out of America, The Rapid Rise of the United States as a Global Energy Superpower.” Analysts tied together views on hydrocarbons production, domestic demand and the trajectory of evolving trade flows.

“Production of hydrocarbons in the United States is mushrooming at a faster and more sustainable pace than even the most enthusiastic analysts had forecast only two years ago,” the Citi team noted.

Most of the focus today is on future LNG exports, but the U.S. gas trade already is expanding. Domestic gas exports to Mexico increased more than 20% in 2013 to average 1.9 Bcf/d. Going forward, the gas trade to Mexico could rise by 1 Bcf/d in 2015 “and continue robustly, with upside potential,” said analysts. Gas exports to Mexico now are constrained by capacity in cross-border gas pipelines; Mexico’s internal gas pipeline capacity/distribution network; and demand growth from gas-fired power plant expansions/industrial demand. However, improvements in gas infrastructure across the border and inside Mexico will alleviate this, with major steps begun through the end of this year, analysts noted.

Meanwhile, U.S. LNG exports by the end of the decade “should rival those of Qatar, the largest such exporter today, and pipeline exports to Mexico and Canada could be of the same magnitude, pitting the U.S. against Russia as the No. 1 or 2 natural gas-exporting country in the world,” said Morse and his team.

To date, more than 10.6 Bcf/d, or around 80 billion cubic meters/year (Bcm/y) of LNG export projects have been approved by the Department of Energy, Citi noted. Analysts see the potential for gas exports to grow to 8.1 Bcf/d (83 Bcm/y) by 2020.

“Adding expected end-of-decade pipeline and LNG gross exports amounts to 148 Bcm/y of natural gas exports. That compares with Russia’s 211 Bcm/y in exports in 2013 and Qatar’s 106 Bcm/y. On a net basis, U.S. gas exports would be lower, given persistent imports from Canada that Citi expects to average 5.3 Bcf/d (40 Bcm/y) in 2020, making net pipeline exports a more modest 1.1 Bcf/d (8.3-Bcm/y) by 2020. Still, the U.S. would start to rival Russia, Qatar and Australia among the export powerhouses, particularly of LNG.”

Combined with the LNG powerhouses of Qatar and Australia, a global glut could occur by 2020, challenging oil indexation as the basis of LNG pricing, noted the Citi team. “Equally if not more important, much of the U.S. LNG offtake is by tolling arrangement and the U.S. does not impose destination restrictions. From the outset, starting in late 2015, U.S. LNG will almost inevitably serve as the basis of a strong spot market, as U.S. exports surge to a level that can rival if not zoom past Qatar as the world’s largest LNG supplier.”

Sending big volumes of U.S. hydrocarbons overseas will squeeze the global markets. “For certain sectors, small volumes bring about big impacts: export volumes of natural gas, condensate and NGLs might be small in the context of domestic U.S. oil and gas markets, or even the global oil market in the case of condensates, but these volumes are big in relation to their destination markets worldwide.”

Analysts outlined a few reasons domestic exports will have an outsized global impact:

Improvements on the unconventional gas side still are ongoing, analysts noted. Production could be more than 90 Bcf/d in 2020, up by almost half from 2011. For instance, technology has pulled production from the Appalachian Basin alone “from minimal levels to levels greater than most countries globally, falling short only of Russia and the U.S.”

The reserve size of shale gas, the associated gas from oil production and robust Canada gas output “are all supportive of continued North American natural gas and natural gas liquids production growth.” From unconventional basins across the United States alone, if the pace of new reserve additions accelerated, reserves could account for more than 50% of the total domestic reserves by end of 2015, analysts estimated.

In addition, associated gas from oil and liquids producing wells could make up as much as 3 Bcf/d per year of the future production growth, and “it should remain strong as the U.S. ramps up oil production,” said Morse and his team.