The heightened uncertainty plaguing gas markets so far in 2020 because of Covid-19 is expected to carry through the winter season, but a bright spot is emerging for the United States as liquefaction is expected to resume full operations by November with growing demand in Europe and Asia. 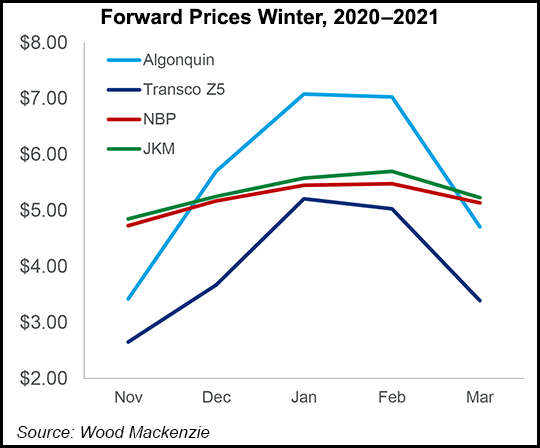 Though European inventories swelled in the spring and early summer, several factors contributed to a much slower pace of injections in the past couple of months, Chu said. Stocks that rose to a 547 Bcf surplus in April have been erased, and now are at a modest 12 Bcf deficit to year-ago levels.

“The response in liquefaction has been global,” Chu said.

In addition to the numerous liquefied natural gas (LNG) cargo cancellations this summer in the United States, Egypt halted exports from its only operational LNG plant, and Australia exported lower volumes because of various maintenance and other plant issues.

“In the category of the unexpected, Prelude floating LNG continued to have trouble ramping, while the massive Gorgon project had Train 2 go down on May 23 due to weld issues requiring repairs,” Chu said. “It’s not expected back until October.”

Meanwhile, price-driven demand in Europe, the United States and Asia, as well as reduced net imports through Ukraine also helped alleviate gas filling up European storage, according to Chu.

Wood Mackenzie sees robust Asian demand, in which U.S. imports peaked at 72% in August, continuing through the winter on “growing secular trends,” both in China and other import countries in south and southeast Asia. The firm also expects continued coal-to-gas switching in northeast Asia, as well reduced pipeline flows from Turkmenistan via the central Asia-China Pipeline.

“We have had a border price of gas at over $6/MMBtu in recent months, which is higher than the cost of LNG this summer, not to mention the cost of transporting across the country,” Chu said. “Flows have significantly reduced, and on the basis of winter competition with Japan Korea Marker levels, we carry this reduction into the winter.”

However, the analyst noted the lack of visibility in commercial agreements, and said there is some risk there may be more flows in the winter than currently modeled.

In terms of China’s national balances, demand has increased over the summer, but the growth has been roughly offset by a 0.5 Bcf/d year/year rise in Gazprom’s Power of Siberia pipeline gas, according to Wood Mackenzie. There’s also been less gas coming from the western border, but this has been more than offset by growing indigenous supply, which was up 1.2 Bcf/d this summer year/year.

“PetroChina noted in their last quarterly earnings that it fully intends to ramp up domestic gas production in the second half, which is a healthy economic business segment for them,” Chu said.

China, therefore, would need less LNG imports this winter as compared to last year, to the tune of about 0.35 Bcf/d, according to Wood Mackenzie. In mature economies like Japan, Korea and Taiwan, the firm sees U.S. imports up 0.39 Bcf/d year/year amid continued economic competition between coal and gas as well as lost generation from nuclear facilities, six of which are shut down because of typhoon-induced flooding.

“There’s really a lot of moving parts, but for the winter, we come to plus 0.8 Bcf/d of Asian demand in a year/year comparison,” Chu said.

The United States has added 1.8 Bcf/d of liquefaction capacity since last winter with the addition of the third production units at the Cameron and Freeport terminals and the full in-service of the Elba Liquefaction facility in Georgia. But that doesn’t mean the Lower 48 won’t be importing LNG from other parts of the world over the coming months.

“We do expect to see an increase in imports to Everett and possibly into Northeast Gateway in response to these prices,” said Wood Mackenzie research analyst Amir Rejvani. “Similarly, we would expect to see Cove Point taking import cargoes as we’ve seen in previous years. Last year, there were four of these cargoes to Cove Point, mainly from Atlantic LNG, and we’d expect the first of these imports in December.”

Rejvani said there is some downside risk to U.S. imports this winter, as the National Oceanic and Atmospheric Administration is projecting a warmer-than-average winter for the Lower 48.

Nevertheless, Wood Mackenzie expects LNG terminal utilization to be roughly in line with year-ago levels, with Sabine Pass running at an average 91% utilization this winter and Gulf Coast facilities not expected to see significant outages following the hurricane-induced shutdowns this summer. Cameron began seeing a resumption of feed gas flows over the weekend following a monthlong shutdown because of Hurricane Laura, with full operations expected by the end of October.

All told, net U.S. LNG exports are expected to average 9.5 Bcf/d this winter, with exports remaining “in the money” throughout 2021.

Meanwhile, a constructive supply/demand outlook portends a substantial drawdown in U.S. storage to around 1,400 Bcf by the end of March, with more production, or potentially fewer LNG exports, needed to meet demand.

“Structurally speaking, U.S. supply is currently in decline, and U.S. operators are signaling to the market that they would rather increase free cash flow rather than volumes should prices increase,” Chu said.

That said, U.S. gas supply can be heavily impacted by oil prices given the associated gas in the Permian Basin, and this November, Wood Mackenzie is expecting a slight bump in U.S. output to just below 90 Bcf/d. The firm’s analysts also expect U.S. operators to capture the contango in the gas curve, returning the volumes curtailed by EQT Corp. and other operators during the summer and earlier this month because of low prices.

The unprecedented impact from Covid-19 has resulted in several delays for sanctioning proposed LNG facilities that were expected to be part of the so-called second wave of projects, including several in the United States. The delays in reaching a final investment decision (FID), mostly because of a lack of long-term sales agreements, could lead to a supply/demand gap of more than 100 million metric tons/year by 2030, according to Wood Mackenzie.

“It’s really an understatement to say this has been a difficult year for the marketers, with prices reaching record lows and U.S. LNG being out of the money on a cash basis for much of the year,” as well as travel restrictions and decelerating commercial negotiations — “all things making it hard for U.S. project developers. But we do see a recovery,” said Wood Mackenzie principal analyst Alex Munton.

Global LNG demand, in Wood Mackenzie’s view, would continue to grow through this decade at around 4%/year. That would lead to a projected 100 mmty shortfall in supply by the end of the decade, which is equivalent to 50% more than the total installed U.S. capacity that exists today.

“This is the next prize for the next slate of project developers, but it’s not without competition,” Munton said.

Qatar will make up a big chunk of the projected supply, with an FID expected soon on a fourth train at the North Field East facility, thereby limiting supply needed elsewhere through 2028.

As for the slate of North American LNG projects vying for market share, Wood Mackenzie expects Sempra Energy’s Costa Azul project in Mexico and Cheniere Energy’s Corpus Christi Stage 3 possibly reaching FID by the end of the year. Cheniere last year sanctioned a sixth train, which is nearly complete. Other projects like Tellurian Inc.’s Driftwood LNG and NextDecade Corp.’s Rio Grande are not expected to sanction their respective projects until 2021 at the earliest.

“Cheniere’s trains are right on schedule and in fact, making faster progress despite the challenges of the pandemic this year,” Munton said. “Construction on other projects has been more disruptive, and some of those delays are already factored into our outlook.”

Wood Mackenzie also plans to monitor the pace of progress on projects already under construction, as well as on the sanctioning of backfill projects to maintain utilization at existing supply projects, especially in Asia and Australia.

“Extended delays in both these areas could result in added market tightness over the next few years,” according to Munton, “and if this occurs, buyers may be incentivized to lock in term supply with new developers sooner rather than later.”