Anyone looking for a silver lining for the U.S. natural gas and oil business should not think it will come from the oilfield services (OFS) sector, as management teams are less optimistic than they were even a few months ago. 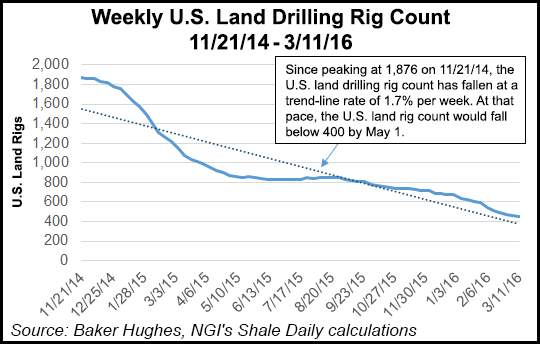 Tudor, Pickering, Holt & Co. (TPH) analysts have been visiting with global OFS operators over the past few weeks and found enthusiasm lacking for the near-term.

“Oil service sentiment is about as negative as we can recall,” the TPH team said in a note Wednesday. It’s “reason enough for the contrarian in us to wonder whether we’re tiptoeing upon the tipping point in terms of when it’s time to get more constructive on oil service stocks for the next industry upcycle…The short answer is not so fast.”

The exploration and production (E&P) sector collectively has curtailed the 2016 capital expenditure outlook by 50% from last year, “with it being reasonable to assume that E&P operators might skew those capital outlays (particularly for new well completions) toward the back half of the year in hopes of obtaining a better line of sight to how oil and natural gas fundamentals and prices are shaping up.”

More concerning for domestic operators is a calculation by TPH that the U.S. land rig count may breach under 400 in the late spring or early summer. An under-400 rig count would set a post-World War II record low, versus the current rig count of about 450.

Notably in North America, OFS companies haven’t been able to respond in real-time to the decline in the U.S. rig count so even the best-in-class franchises may see first-half 2016 profits near/at/below breakeven, TPH analysts said. That means the sector “will yet again have to find ways to take additional costs out of the system.”

More headcount reductions would begin to cut into “organizational bone versus fat and muscle, so how will oil service companies manage through this next (lower activity) phase of the downturn?”

As well, the resilient deepwater U.S. Gulf of Mexico now faces a decline in activity this year and potentially into 2017 as rigs roll off contracts and major development work is completed.

Oilfield rental tools, such as drill pipe, pressure control equipment and wellsite accommodations, may experience “protracted utilization and margin pressures, even in the early innings of the next cyclical recovery,” according to TPH. “Equity market sugar daddies are bestowing cash aplenty upon E&P companies so far this year,” which could mean an unexpected surge in spending toward the back half of this year on well construction and completion activities “if commodity prices cooperate a little bit.

OFS companies face an extremely challenging environment through at least 2018 as upstream capital spending is sharply reduced and as the creditworthiness of their E&P companies declines, Moody’s Investors Service said.

Coupled with an already over-supplied equipment market this is going to keep pricing under heavy pressure over at least the next two years, credit analysts said Tuesday.

“Leverage and cash flow metrics are expected to deteriorate into 2017 as demand for oilfield services declines.”

Moody’s recently concluded its ratings reviews of seven U.S.-based operators, both onshore and offshore. Only FMC Technologies Inc.’s ratings were confirmed, in part on its sizable backlog.

“The drop in oil prices and weak natural gas prices has caused a fundamental change in the energy industry, and its ability to generate cash flow has fallen substantially,” credit analysts said. “For oilfield service companies specifically, weakening cash flow and liquidity, limited capital market access, and depressed asset values will hinder the ability of companies to meaningfully reduce debt creating significant stress in the industry.”