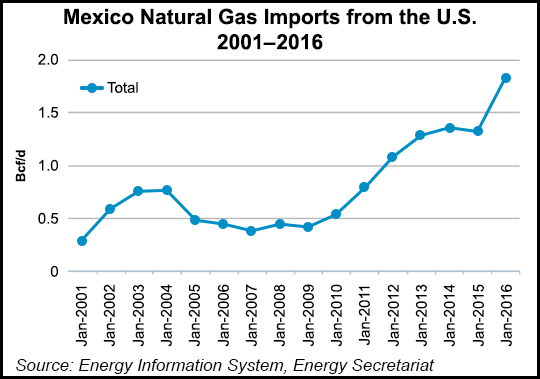 Pemex reported a net loss of 296 billion pesos (ca. $14.3 billion) for the year, smaller than the 713 billion pesos it lost in 2015. Pemex CEO JosÃ© Antonio GonzÃ¡lez, appointed a year ago by president Enrique PeÃ±a, and his team have managed to slow the hemorrhage, but a lot more still needs to be done.

Production during the fourth quarter of 2016 reached only 4.58 Bcf/d, due to a 10.9% decline in associated gas, and a 24.8% natural decline in non-associated gas fields in the Veracruz and Burgos basins.

Pemex’s investment in new wells reflected the company’s financial straits. For 2016, Pemex finished 149 wells, compared to 312 a year before, a 52.2% drop. The fourth quarter of 2016 saw only 25 new wells finished, compared to the 68 a year prior.

An accident in the AbkatÃºn-A platform in February was largely responsible for this increase, the company said. Yet quarterly figures show how, by the fourth quarter, venting had dropped below the level of a year prior, 420 Mcf/d vs 440 Mcf/d.

The decline in domestic production necessitates increasing imports to meet demand. Per the Energy Ministry’s energy information system, pipeline imports from the United States rose from an average of 1.33 Bcf/d in 2015 to 1.83 Bcf/d in 2016. Imports represent, then, 60% of domestic supply and just over 35% of total consumption, but they are rising fast.

For example, imports for January 2017 topped 2 Bcf/d, which represents a 35.2% increase from the previous January. Indeed, this 2 Bcf/d figure had previously been seen only during the top demand months of August, September and November of last year.

However, continued growth of natural gas imports is also predicated on the Mexican economy pulling ahead. With the Central Bank on Wednesday lowering its forecast for 2017 to 1.8% growth, even cheap natural gas from Texas will have a hard time finding eager customers.

U.S. crude inventories declined for the first time in four weeks as demand for gasoline and other fuels derived from oil bounced back and imports and production slid lower. The U.S. Energy Information Administration (EIA) said Wednesday oil inventories for the week ended Oct. 15, excluding those in the Strategic Petroleum Reserve, decreased by 400,000…