A pivotal year awaits exploration and production (E&P) companies worldwide, with capital spending on course to increase 7% overall, led by a 15% gain in U.S. onshore-weighted budgets, according to Evercore ISI’s annual survey. 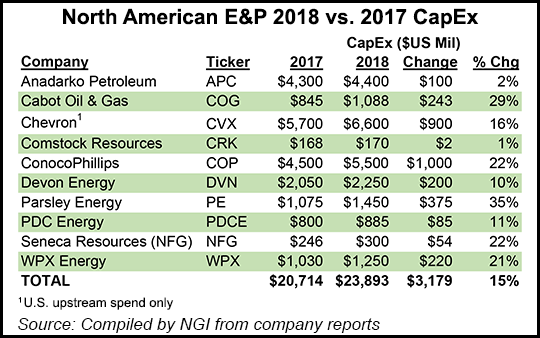 The global survey of close to 300 E&Ps found North America leading the way in capital expenditures (capex), while international/offshore spend also is poised to move up, said analyst James West. He led a webinar on Wednesday to discuss the survey’s results.

“The U.S. will continue to pace the spending in 2018 with an estimated 15% lift to capex,” he said. “Canada spending is also expected to grow, albeit at 9%, with commodity tailwinds that could provide budgeting upside through the end of the year. International capex is projected to improve 4%, the first year/year capex gain in four years.”

Led by spending in the Permian Basin and followed by Oklahoma’s stacked reservoirs, the United States should once again set the pace for global spend, the survey found.

Still, 2018 spending is likely to remain nearly 50% below peak-2014 levels, when oil prices collapsed and the sector fell into a tailspin.

“We do not believe these spending levels will adequately safeguard against a looming supply disruption,” West said. There also is “a fair amount of ”un-quantifiable’ capex that will be brought to the table in North America by smaller private operators” and private equity.

“This factor (along with oil prices) has ranked No. 1 or No. 2 over the past nine years since 2010, following an 11-year stretch where natural gas prices dominated,” West said.

In determining capex for 2018, E&Ps are keeping an eye on commodity prices, but not as much as in years past. Natural gas prices fell as a factor in capex plans from last year to No. 5 from No. 3, while oil prices fell to No. 3 from No. 2.

Meanwhile, having capital available to spend “is a relatively new trend,” West said. “For only the second time in our survey history, capital availability ranked No. 2 as the leading determinant to budgets — matching its previous high in 2015.”

“While expectations are lower than the mid-year expectation of $3.14/MMBtu for 2018, natural gas budget assumptions have historically diverged more sharply than actual prices,” West said. “Looking back at surveys past, natural gas prices outperformed survey targets from 2000-2005, followed by a 2009-2012 period of 30% underperformance and a 2014-2016 period of 15% underperformance.”

Evercore’s analysts think “gas budgets may be more sticky than usual” in 2018, with capex based on gas prices “that are generally in line with the strip.” Operators surveyed also cited “a wide band of $2.30/MMBtu and $3.75/MMBtu for materially decreasing and increasing spending, respectively.”

For oil, operators are looking for an average price in 2018 of $52/bbl West Texas Intermediate and $59 Brent.

“Barring any catastrophic pullback in oil from here, we could be in the midst of a long-and-strong upcycle driven by constructive fundamentals on both the demand and supply side of the equation,” West said.

“This represents a slightly more austere capital outlook than in 2017, when 66% of the companies in our survey outspent cash flow while 25% underspent cash flow and 9% spent in line with cash flow,” West noted.

The “limits of shale” may be tested in North America during 2018 too.

While this year exemplified the ability of the oilfield services (OFS) industry to revolutionize an “exceedingly demanding” unconventional resource, North America’s shale/unconventionals remain a “commoditized” and fragmented business, West said. As resource optimization and geological constraints have tightened, the bars are set ever higher.

“We believe that this will reinvigorate what has been a rather underwhelming merger and acquisition cycle, increase barriers to entry, accelerate OFS capacity attrition, and yield a pricing bifurcation across the majority of product/service lines,” he said.

“Higher-than-expected well costs will subsequently force E&Ps to re-evaluate the productive extent of their coveted acreage.”

Evercore’s team believes 2018 may “be the battleground” that tests North America’s unconventional production growth, and it could result in a shift back toward more competitive international plays.