Oil and natural gas activity in the Permian Basin, Eagle Ford and Haynesville shales expanded at a steady clip during the third quarter, but the pace decelerated from the record-breaking second quarter, the Federal Reserve Bank of Dallas said. 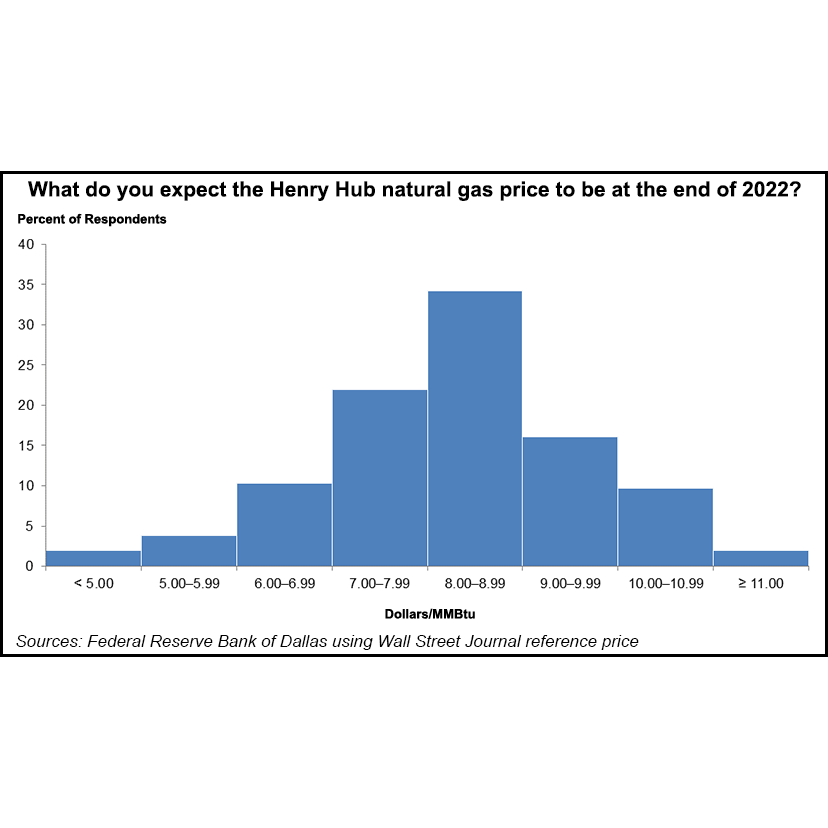 The Dallas Fed, as it is known, collected 3Q2022 data from Sept. 14-22 from 163 energy firms headquartered in Louisiana, New Mexico and Texas. The quarterly polls for the Dallas Fed’s Eleventh District gauge activity trends and price forecasts from oilfield services (OFS) and exploration and production (E&P) executives.

For West Texas Intermediate (WTI) oil, executives predicted a price of $89/bbl at the end of December; WTI spot averaged $85.49 during the survey period.

Inexpensive Natural Gas At An End?

Asked if the “age of inexpensive U.S. natural gas” may come to an end as LNG exports to Europe expand, executives had varying views.

One E&P executive said, “The price of natural gas has increased solely due to the reduction of Russian supplies. The price we have received the past several years has been below replacement cost since the market was flooded with new supply from ‘growth’ companies.

“I would assume the price will drop very quickly if the Russia-Ukraine situation is ever resolved.”

Another E&P executive said “inexpensive” was “a subjective view relative to natural gas prices. Over the past five-plus years, natural gas commodity pricing has materially impacted supply much greater than demand in the U.S. This has resulted in abnormally low natural gas pricing over this period.

“As liquefied natural gas exports grow and natural gas volume growth in the U.S. moderates, natural gas pricing has increased and a new higher-floor pricing has emerged. While this pricing is higher in the U.S. relative to nearly all other areas around the world, U.S. gas consumers (individual and commercial) still enjoy the benefit of lower fuel cost inputs than others.”
Even using a “hypothetical $7/MMBtu price, U.S. power generation still provides a material cost advantage to U.S. manufacturers,” the E&P executive said. “So, yes, it is more apparent that very low natural gas pricing is unlikely to return. However, the U.S. natural gas price for consumers is still highly competitive and in many ways advantageous relative to other western countries. Our supply assurance is materially higher at this still-competitive price.”

Eighty-five percent of executives said they also expect a “significant tightening of the oil market by the end of 2024,” the survey noted.

“Oil and gas industry activity has flatlined,” an E&P executive said. “We should incentivize equipment and material manufacturers and suppliers to increase supplies.

“Sustained double-digit inflation is not the solution for a healthy industry, and projects are becoming uneconomical. A pragmatic energy and environmental solution is required; otherwise, the ‘first world’ can become the ‘third world’ with respect to energy. Nascent energy-transition technologies are too early to be of scale, and the world is starved of the necessary oil and gas expenditure needed for economic development.”

Costs increased for a seventh straight quarter, with the indexes near historical highs, according to the energy economists.

The index for OFS input costs “remained elevated but slipped from its series high to 83.9. None of the 58 responding OFS firms reported lower input costs.”
For the E&Ps, the index for finding and development costs was 64.7, down slightly from 2Q2022’s 70.6. The index for lease operating expenses was 70.2, slightly down from 74.1 in the previous three months.

“It is taking longer for firms to receive materials and equipment,” the survey found. “The supplier delivery time index remained elevated at 28.4 in the third quarter, down slightly from a series high of 31.9 in the second quarter. Among OFS firms, the measure of lag time in delivery of services declined from 36.0 to 21.1 but remained well above average.”

The equipment utilization index was elevated but down from 66.7 in the second quarter to 55.2. The operating margin index declined sequentially from 32.7 to 25.4. The index of prices received for services hit a record high to 64.9 from 62.7 in 2Q2022.