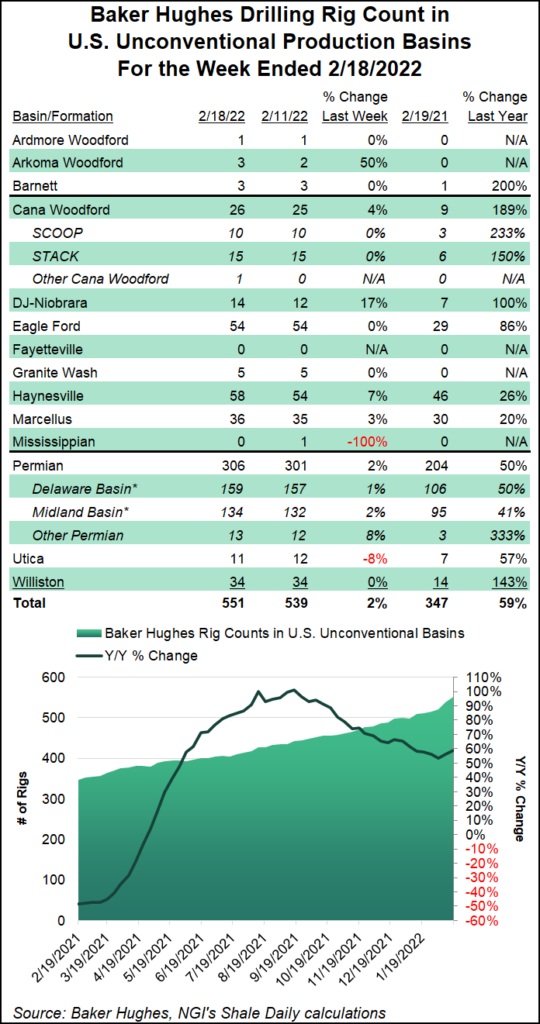 Including increases of six natural gas-directed rigs and four oil-directed units, the combined U.S. count jumped 10 units higher to 645 for the week ended Friday (Feb. 18). That follows a 22-rig surge in the week-earlier period. The 645 active U.S. rigs as of Friday represented a 248-rig year/year increase, according to the BKR numbers, which are partly based on data from Enverus.

The Canadian rig count added one unit to reach 220 for the week, up from 172 in the year-earlier period. Net changes included a gain of three natural gas-directed rigs, partially offset by a decline of two oil-directed rigs.

Broken down by major play, the Permian led with a net increase of five rigs week/week, growing its total to 306. The Haynesville added four rigs week/week to end with 58 rigs, up from 46 a year ago. The Denver-Julesburg Niobrara added two rigs, while the Arkoma Woodford, Cana Woodford and Marcellus Shale each added one. The Mississippian Lime and Utica Shale, meanwhile, each dropped one rig from their respective totals.

Broken down by state, Texas saw a net gain of eight rigs week/week, with Colorado and New Mexico each adding two rigs. Pennsylvania added one rig to its total, while Louisiana, Ohio and Wyoming each dropped one rig, BKR data show.

Demand rose 4% week/week to average 22.7 million b/d during the week ended Feb. 11, aided by a 4% jump in jet fuel consumption, the agency said.

Travel fuel consumption – including demand for gasoline and diesel — is expected to accelerate further as spring weather arrives and the effects of the Omicron variant of the coronavirus ebb, Rystad Energy analysts said. This could play out domestically and globally, according to the analysts.