A major increase in oil-directed drilling, especially in Texas, propelled a 22-rig surge in the U.S. rig count during the week ended Friday (Feb. 11), lifting the overall domestic tally to 635, the latest numbers from Baker Hughes Co. (BKR) show. 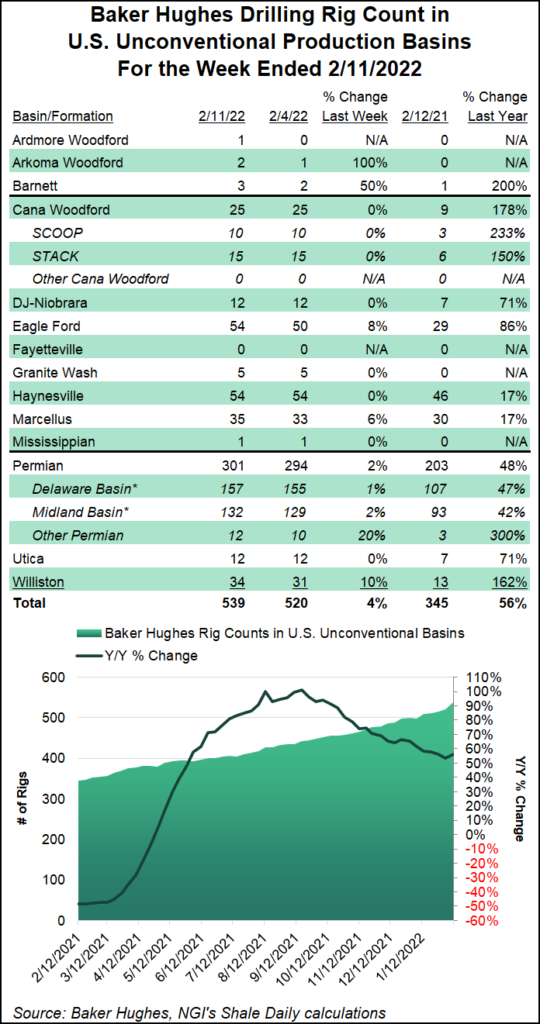 Including gains of 19 oil-directed rigs, two natural gas-directed rigs and one miscellaneous unit, the total number of active U.S. rigs ended the week up 238 units from its year-earlier total, according to the BKR numbers, which are partly based on data from Enverus.

Land drilling accounted for the entirety of the net increase in domestic drilling activity, with the Gulf of Mexico holding steady week/week at 16 rigs. Four vertical units were added alongside 19 horizontal units, partially offset by a one-rig decline in directional drilling.

The Canadian rig count, meanwhile, added one unit to reach 219 for the week, up from 176 in the year-earlier period.

Broken down by major basin, the Permian Basin led with an increase of seven rigs week/week, bringing its total to 301, versus 203 a year-ago. The Eagle Ford Shale added four rigs, while the Williston Basin added three.

The Marcellus Shale added two rigs during the period, while the Ardmore Woodford, Arkoma Woodford and the Barnett Shale each added one rig to their respective totals.

Counting by state, Texas added a whopping 13 rigs to finish the week at an even 300. North Dakota, Oklahoma and Pennsylvania each added three rigs week/week, while Utah added two.

Louisiana and West Virginia each saw a net loss of one rig for the period, the BKR data show.

Earlier in the week, OPEC in a new monthly report said worries about the Omicron variant of the coronavirus are fading as the global economy heats up, supporting mounting oil demand that could soon surpass previous expectations.

“The main challenges for 2022 remain the containment of the Covid-19 pandemic and any resulting restrictive measures, supply chain disruptions, inflation, and labor shortages that could dampen economic growth,” researchers said. “Nevertheless, upside potential to the forecast prevails, based on an ongoing observed strong economic recovery.”