U.S. oil producers, unfazed by the Omicron variant of the coronavirus and an anticipated lull in demand between the Christmas and New Year holidays, maintained production at a 2021 peak level during the final week of the year. 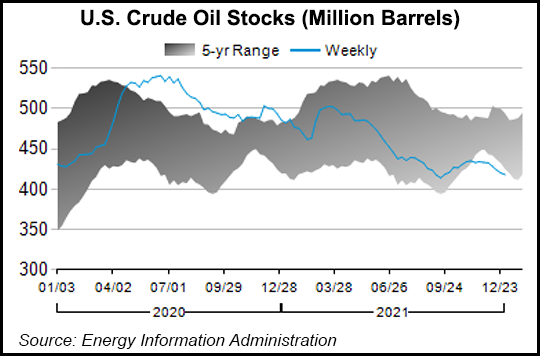 The U.S. Energy Information Administration (EIA) said Wednesday that domestic crude output held at 11.8 million b/d for the period ended Dec. 31. That was on par with the prior week, when production reached its highest weekly level for the year following a gradual recovery from the pandemic-induced slump of 2020. Output last week was up 7% from a year earlier.

Rampant spread of the Omicron variant in late December forced airline personnel to stay home and caused travel interruptions. This compounded an expected easing of demand for motor gasoline because of fewer people driving to work during the annual holiday break.

U.S. cases of the coronavirus set a daily record above 1 million earlier this week, amplifying concerns about the highly transmissible Omicron. However, public health officials in the United States and South Africa, where the new variant first spread widely, said the effects caused by Omicron appear less severe than prior strains. As such, analysts said, producers are tracking along with months-long recovery in demand that is expected to continue this year.

Indeed, during the seven-day period prior to last week, U.S. petroleum demand jumped 9%, and over the past four weeks, consumption was up 14% to 21.4 million b/d, according to EIA. In that month-long stretch, gasoline demand climbed 15% from the same period a year earlier, while distillate fuel rose 12%. Jet fuel consumption spiked 37%.

For the final week of 2021, U.S. commercial crude inventories, excluding those in the Strategic Petroleum Reserve, decreased by 2.1 million bbl from the previous week. At 417.9 million bbl, stocks are 8% below the five-year average.

Producers globally are betting on continued momentum as well.

The Organization of the Petroleum Exporting Countries (OPEC), headed by Saudi Arabia, and a Russia-led group of allies known as OPEC-plus, this week agreed to boost production by another 400,000 b/d in February, continuing a pace of monthly supply increases the cartel began in August.

OPEC-plus officials cited Omicron as a concern, but policymakers also said during a meeting they were confident governments around the world would not institute major new economic restrictions to slow spread of the disease, enabling the travel and business activity that fueled a resurgence in oil demand last year to continue into 2022.

Global output steadily climbed in the second half of 2021. OPEC officials this week said they expect global supply to exceed demand by March should production continue at the targeted pace. However, some countries are struggling to ramp up.

Libyan production dropped in recent days amid political turmoil and pipe leaks, while Nigeria and Angola have failed to meet production targets in recent months because of deteriorating infrastructure. This may leave room for other countries, including the United States, to pump more oil.

“As things stand now, Libyan output is down 550 million b/d. In November, Nigerian oil production was 360 million b/d below target, and Angola was missing its mark by 300 million b/d,” said Enverus’ Bill Farren-Price, director of the firm’s Intelligence Research division. “All of this points to the delicate balance between OPEC supply policy and the unplanned outages that are increasingly doing the market balancing job in its place.”