Domestic consumption of gasoline and other petroleum products climbed last week, and producers boosted output to a 2021 high to meet the mounting demand, data from the U.S. Energy Information Administration (EIA) showed. 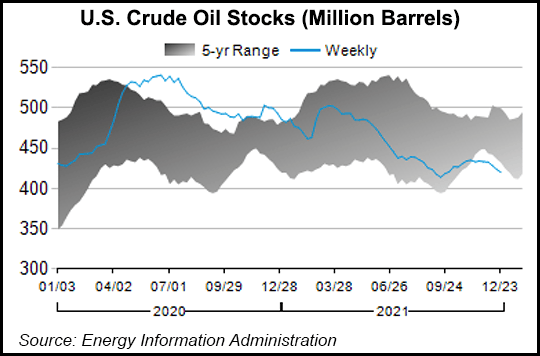 The increases for the week ended Dec. 24 came even as the Omicron variant of the coronavirus spread rapidly throughout the Lower 48. New outbreaks caused air travel interruptions and raised fresh concerns among public health officials about the pandemic as winter weather settles in and people spend more time indoors, where the virus is more transmissible.

Americans, however, appeared to shrug off the threat in the run-up to the long Christmas holiday weekend, as consumption of all petroleum products tracked by EIA rose last week. Overall demand jumped 9% week/week, the agency said Wednesday in its latest Weekly Petroleum Status Report.

Raymond James & Associates Inc.’s Mike Gibbs, managing director, noted that an increasing number of Americans are inoculated against the virus and confident that vaccines would protect against serious illness. Additionally, he said, early indications from studies of Omicron “suggest a very transmissible but less severe disease.”

Hospitalizations, Gibbs added, “are rising but not to the degree of previous strains” and “deaths have stayed relatively low for now. We want to at least be mindful of the possibility that Covid may be transitioning toward an endemic (something we live with like the flu) rather than a pandemic. We are hopeful that the global reopening can progress over the coming months as Covid concerns subside.”

U.S. producers are betting on continued momentum as well. Crude output reached 11.8 million b/d last week – a 2021 peak and up 200 million b/d from the previous week.

Results of a quarterly survey by the Federal Reserve Bank of Dallas, released Wednesday, showed that oil production activity accelerated throughout the fourth quarter of this year. The survey’s oil production index – a reflection of input from exploration and production executives – produced a 2021 high reading of 19.1 for 4Q2021. That was up from a reading of 10.7 the prior quarter.

Even as output increases, it remains more than 1 million b/d below pre-pandemic levels and likely will need to climb further to align with consumption in 2022, according to EIA, barring surprise virus-induced pauses in demand.

With demand rising, U.S. commercial crude inventories last week, excluding those in the Strategic Petroleum Reserve, decreased by 3.6 million bbl from the previous week. At 420 million bbl, oil stocks are 7% below the five-year average.

A similar resurgence in demand and supply is developing globally. The International Energy Agency (IEA) forecast global crude demand would grow by 5.4 million b/d this year and another 3.3 million b/d next year, reaching pre-coronavirus levels of 99.5 million b/d. IEA also expects increased production in the United States and among members of the Organization of the Petroleum Exporting Countries (OPEC) and allies known as OPEC-plus.

The Saudi-led OPEC and Russia-led partners that make up OPEC-plus this month said they would ramp up production by 400,000 b/d in January to help align supply with demand, continuing a pace of monthly supply increases the cartel began in August.

OPEC-plus is scheduled to meet next on Jan. 4 to decide whether to continue production increases in February and beyond.

Rystad Energy senior analyst Louise Dickson said Saudi officials, in particular, are optimistic about 2022 demand. They are mindful of Omicron, she said, but also confident in vaccination efforts across North America, Asia and Europe.

“The Saudis are notably bullish about the oil demand recovery,” Dickson said after the December OPEC-plus policy meeting. Their confidence, she said, bodes well for continued production increases further into 2022.