American crude producers last week held output at the high point for the year. Demand for petroleum products was flat from the prior week amid soaring prices, the U.S. Energy Information Administration (EIA) said Wednesday, but consumption is expected to mount this summer. 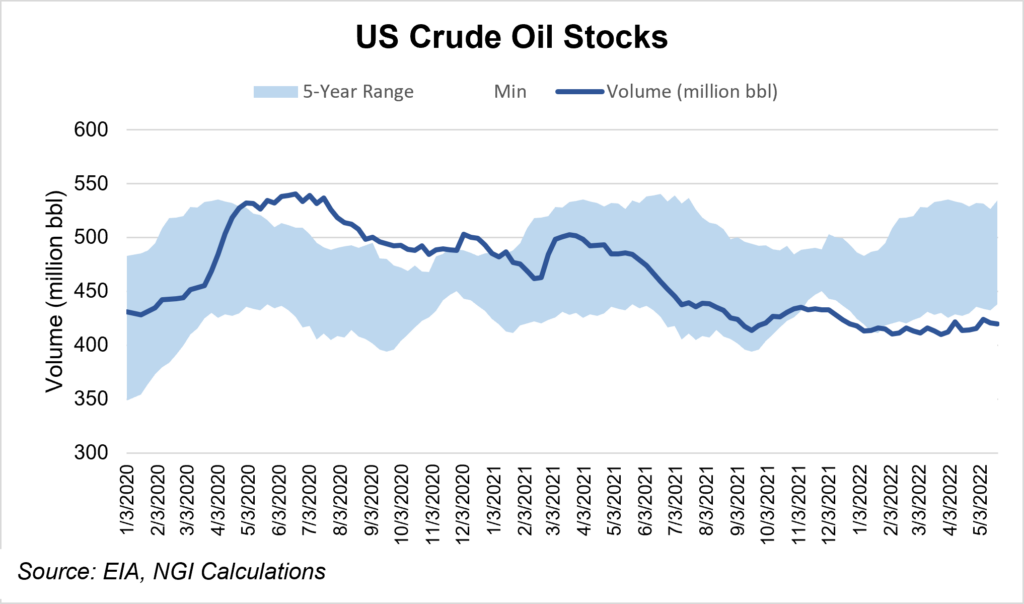 At the same time, demand is steady but creeping ahead in recent weeks because of soaring prices at the pump. Gasoline and diesel fuel prices have hit record highs in May, according to AAA.

Domestic petroleum demand for the latest EIA period climbed less than 1%, to nearly 19.7 million b/d, after rising 2% the previous week.

Total products supplied over the last four-week period averaged 19.5 million b/d, up 2% from the same period in 2021.

Analysts anticipate that, even amid high prices, domestic demand would climb during the summer travel season. This should justify further production increases in the months ahead, said Jacob Thompson of Samco Capital Markets, managing director.

“Anything can happen – a big Covid flare-up or a jolt to the economy – but barring some setback, demand looks to hold up and production, with oil priced where it is, almost has to rise,” he told NGI.

Thompson also noted that global demand is poised for a summer jump.

China, the world’s largest crude consumer, pulled back on oil demand this spring amid a coronavirus surge that motivated government officials to impose new lockdowns. This included Shanghai, the country’s largest city, with about 25 million residents.

But authorities in that city and others in China are preparing to ease restrictions as soon as next week, potentially opening the door to a surge in activity and, by extension, increased need for travel and industrial fuels.

At the same time, the United States and other countries have banned imports of Russian oil in protest of the Kremlin’s invasion of Ukraine. That has driven an estimated 1.0 million b/d off the international market. The European Union also is considering a plan to phase out Russian oil, a move that could slice another 3.0 million b/d chunk out of the crude market.

Against that backdrop, the global market is looking to the United States and OPEC to further increase output this year.

OPEC this month estimated that world oil demand in 2022 would increase by 3.4 million b/d year/year.

The cartel and its allies, collectively known as OPEC-plus, said it would target a 432,000 b/d production increase in June, holding to a gradual pace of escalation launched in August 2021.Since then, the cartel has targeted monthly output bumps of about 400,000 b/d. The Saudi Arabia-led consortium is methodically unwinding nearly 10 million b/d in cuts made in 2020 in response to the initial demand destruction imposed by the pandemic.