Domestic petroleum consumption climbed in early February, driven by robust demand for gasoline, while production only crept ahead and inventories dropped to a 2022 low. 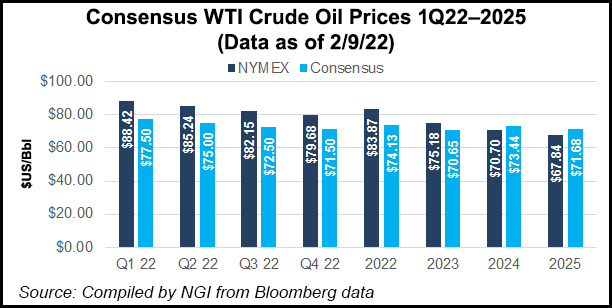 Demand rose 2% week/week to 21.9 million b/d during the period ended Feb. 4, according to the U.S. Energy Information Administration (EIA). The advance was driven by an 11% jump in gasoline consumption, according to EIA’s latest Weekly Petroleum Status Report.

Demand for travel fuels is expected to accelerate as winter weather lifts in coming weeks and the impacts of the latest coronavirus variant gradually fade, Rystad Energy analysts said. This is expected domestically and globally, they added.

“The Omicron variant appears to be waning in many parts of the world” – including the United States — “encouraging countries to relax restrictions and boosting crude demand as a result,” said Rystad’s Louise Dickson, senior oil market analyst.

The demand surge comes “in what is usually a weaker early winter slump” and suggests even stronger consumption in the warmer months ahead, Dickson added.

At the same time, production is holding relatively flat early in 2022 – and more than 1.0 million b/d below pre-pandemic highs.

The combination of flattish supply and mounting demand has resulted in steadily declining inventories – both in 2021 and to date this year.

U.S. commercial oil inventories, excluding those in the Strategic Petroleum Reserve, decreased by 4.8 million bbl from the previous week. At 410.4 million barrels, stocks are 11% below the five-year average, EIA said.

The supply/demand trajectory is putting steady upward pressure on prices. West Texas Intermediate crude traded around $90/bbl after the EIA data was posted Wednesday morning. That put the U.S. benchmark price near a seven-year high. Brent crude, the international standard, hovered above $90 Wednesday. Several analysts have forecast Brent prices will reach $100 this year.

Samco Capital Markets Inc.’s Jacob Thompson, a managing director, said the lofty prices could galvanize U.S. producers to ramp up output in the spring. American producers, he noted, are under pressure from investors to steadily shift capital expenditures away from oil to renewable fuel projects. But given that crude prices are holding strong at multi-year highs, more producers are bound to seize the profit opportunity while also meeting an obligation to support near-term energy needs.

“At this rate, we’re going to have to see companies pumping more oil,” Thompson told NGI.

Morningstar analysts hold a similar view at the global level. “Oil prices will remain elevated, at least through the first half of 2022, as markets remain tight,” they said in a report. However, they expect supply to balance with demand by early 2023.

OPEC researchers predicted demand would rise by 4.15 million b/d this year and that consumption would exceed 100 million b/d in the third quarter, returning demand to pre-pandemic levels.

The Saudi Arabia-led cartel and a Russia-led group of allies known as OPEC-plus, agreed last week to further increase output by 400,000 b/d in March. This would continue a targeted rate of monthly supply increases OPEC-plus began in August of last year to gradually unwind production cuts of nearly 10 million b/d made in April 2020.

Several member countries, however, have struggled to meet higher quotas in recent months, Dickson noted, including Libya, Nigeria and Angola. These and other countries are grappling with deteriorating infrastructure.

Iran, meanwhile, is eager to release more oil into the global market, but to date it is restrained by U.S. sanctions. What’s more, supplies from Russia are in question as that country pushes toward the brink of war with Ukraine. The United States and European powers have threatened new economic sanctions against Russia if it invades Ukraine. This could interrupt the flow of Russian oil and impose added demand for supplies from other countries.

“Downside supply risk still seems to drive the market,” and any further production interruptions “would impact not only short-term supply but also grander upstream developments into the future,” Dickson said.