President Trump continues to enjoy overwhelming financial support from the energy sector in the run-up to the Nov. 3 election. However, former Vice President Joseph R. Biden Jr. has gained some ground among industry donors and holds a lead in recent overall donations and in the polls. 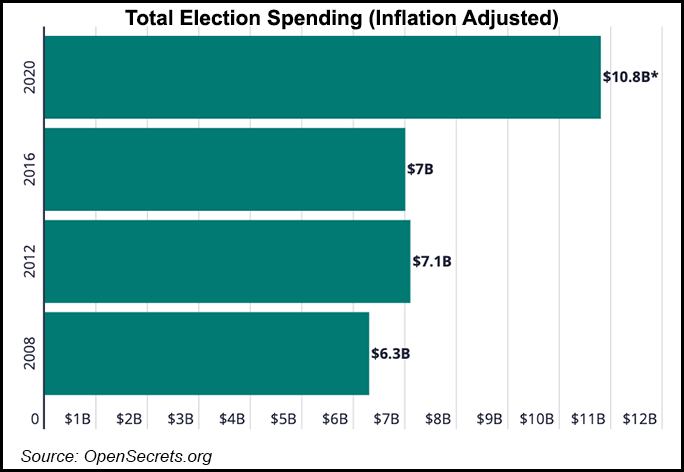 The president and Democratic nominee Biden are scheduled to square off Thursday night in a final televised debate.

Donors tied to the oil and gas industry gave about $13 million to Trump’s campaign and outside groups supporting his re-election as of mid-October. The donation total spans the current election cycle, which got underway at the start of 2019. That compares with about $900,000 donated to Biden’s campaign from people and political action committees (PAC) associated with the energy sector, according to the Federal Election Commission.

The bulk of the president’s energy backing comes via a $10 million donation to pro-Trump super PAC America First Action from Energy Transfer LP CEO Kelcy Warren, an analysis by the Center for Responsive Politics (CRP) shows.

While energy donors still “vastly favor Republicans,” with about 85% of donations going to the GOP, they have spent far more on other political races, according to CRP. The nonpartisan organization tracks political donations. In total, the industry has donated about $97 million in the current cycle.

Energy giants such Chevron Corp. and ConocoPhillips make direct corporate contributions to Republican groups that focus on congressional races, CRP said, but not groups dedicated to re-electing the president.

Notably, ExxonMobil employees have donated more to Biden than Trump, with nearly $112,000 going to the Democrat compared to the president’s $69,000, CRP found.

Biden has called for a $2 trillion infrastructure and clean energy plan, one that he said would at once create jobs and combat climate change. His plan would transition the country from fossil fuels to renewable energy sources, with a goal to decarbonize the electric power sector by 2035.

What’s more, the energy industry has spent less overall so far than the $104 million donated in the prior cycle — with the election less than two weeks away — while other industries have ramped up political spending. Among more than 80 sectors the CRP follows, oil and gas ranked 14th in political donations in the current cycle, after ranking in the top 10 the three previous cycles.

CRP noted the oil price crash early in 2020 amid the demand destruction caused by the coronavirus pandemic. The organization said steep losses for a slew of energy companies in recent quarters is the likely driver of the energy decline.

In the home stretch, Biden appears to be pulling ahead in fundraising overall. His campaign and the Democratic National Committee collectively reported $383 million in donations last month, well ahead of Trump’s $248 million.

The Democrat also continued to lead in the polls. Results from a New York Times and Siena College poll reported Tuesday showed Biden holding a nine-point lead nationally. The poll found Biden with support from 50% of likely voters, and Trump with 41%. The remainder was divided among other candidates or undecided voters.