The United States is “by far the No. 1 producer of oil and natural gas anywhere in the world, by far,” and the country’s allies should look to that supply to enhance their energy security, President Trump said at the World Economic Forum in Davos, Switzerland, Tuesday. 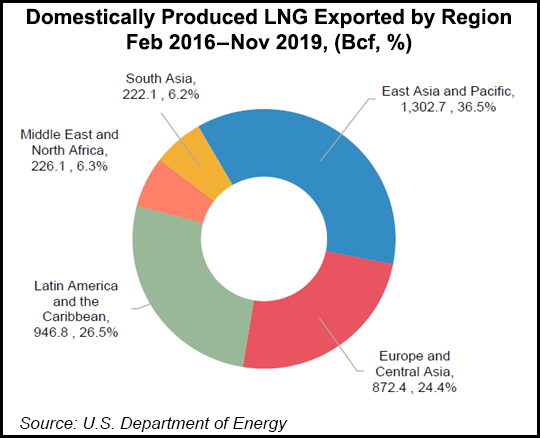 “While many European countries struggle with crippling energy costs, the American energy revolution is saving American families $2,500 every year in lowering electric bills and numbers that people said couldn’t happen, and also, very importantly, prices at the pump,” Trump said.

As he did in similar remarks at Davos in 2018, Trump said tax cuts and pared down federal government regulations during his administration have “been so successful that the United States no longer needs to import energy from hostile nations.

“With an abundance of American natural gas now available, our European allies no longer have to be vulnerable to unfriendly energy suppliers either. We urge our friends in Europe to use America’s vast supply and achieve true energy security. With U.S. companies and researchers leading the way, we are on the threshold of virtually unlimited reserves of energy, including from traditional fuels, LNG [liquefied natural gas], clean coal, next-generation nuclear power, and gas hydrate technologies.”

At the same time, nations should disregard critics focused on carbon emissions and global climate change.

“But to embrace the possibilities of tomorrow, we must reject the perennial prophets of doom and their predictions of the apocalypse. They are the heirs of yesterday’s foolish fortune-tellers — and I have them and you have them, and we all have them, and they want to see us do badly, but we don’t let that happen. They predicted an overpopulation crisis in the 1960s, mass starvation in the ’70s, and an end of oil in the 1990s. These alarmists always demand the same thing: absolute power to dominate, transform, and control every aspect of our lives.”

“We don’t want these things done by 2050, 2030 or even 2021. We want this done now,” Thunberg said. “It may seem like we’re asking for a lot. And you will of course say that we are naïve. But this is just the very minimum amount of effort that is needed to start the rapid sustainable transition.”