The U.S. Energy Information Administration (EIA) reported a pull of 179 Bcf natural gas from storage for the week ended Jan. 7, the largest so far this winter and in line with expectations. Nymex natural gas futures, already down in morning trading following a four-day rally, held deep in the red after the print. 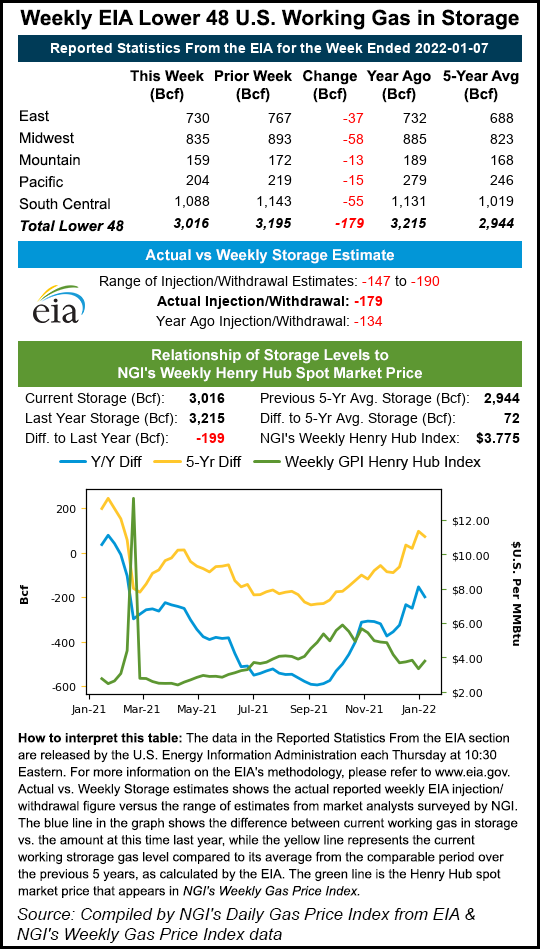 Ahead of the EIA report, the February contract was down 38.7 cents at $4.470/MMBtu, and the prompt month gave up a bit more ground to around $4.455 when the government data was released. After another 30 minutes of trading, it was at $4.372, down 48.5 cents from Wednesday’s close.

Analysts had anticipated the hefty draw, given freezing conditions over the Midwest and Plains that fueled robust heating demand. The winter conditions stretched as far south as Texas, where hard freezes in the Permian Basin forced producers to curtail output. Freeze-offs tightened supply/demand balances during the week and necessitated steep draws from storage throughout the nation’s midsection.

Prior to the report, NGI predicted a 164 Bcf pull. A Bloomberg survey found withdrawal estimates ranging from 164 Bcf to 190 Bcf, with a median pull of 178 Bcf. The median estimate of a Reuters poll was a decrease in storage of 175 Bcf. Estimates spanned 147 Bcf to 186 Bcf.

The latest pull decreased inventories to 3,016 Bcf, below the year-earlier level of 3,215 Bcf but above the five-year average of 2,944 Bcf.

By region, the Midwest led with a pull of 58 Bcf, according to EIA. The South Central followed closely with a withdrawal of 55 Bcf, including a 37 Bcf pull from nonsalt facilities and a 17 Bcf draw from salts.

EIA noted totals do not always equal the sum of components because of independent rounding.

The East region, meanwhile, posted a decline of 37 Bcf. Pacific inventories fell by 15 Bcf, while Mountain region stocks declined by 13 Bcf, according to EIA.

Looking ahead, analysts on The Desk’s online energy platform Enelyst said they expected several more large withdrawals with coming EIA reports. They cited freezing conditions early this month and forecasts for the coldest weather of the season to date during the final third of January. The expected deep freeze could necessitate elevated heating needs as well as more freeze-offs in gas-producing basins, said Refinitiv analyst Shuya Li.

The analyst noted that power sector demand as well as steady calls for U.S. exports could also influence coming withdrawal levels. “Our current forecasts point to at least three or four 200-plus draws in the next few weeks,” Li said.