TransCanada Corp. has won the contract to construct, own and operate the 866 MMcf/d Tula-Villa de Reyes pipeline in Mexico for the country’s Comision Federal de Electricidad (CFE). 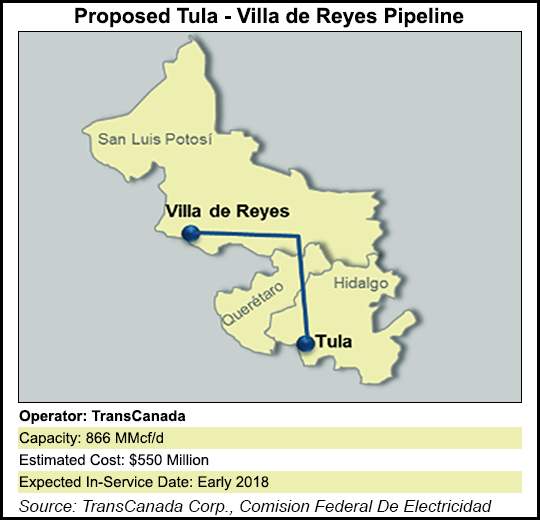 CFE, the state-owned power company, and TransCanada unit Transportadora de Gas Natural de la Huasteca have a 25-year gas transportation service contract. The project is one of several in Mexico that add up to more than 3,000 miles of new pipelines (see Daily GPI, Oct. 15, 2015). Adata sheet on Tula-Villa de Reyes is available at the CFE website.

TransCanada said it expects to invest approximately US$550 million in the 36-inch diameter, 261-mile pipeline and anticipates an in-service date of early 2018. The pipeline will begin in Tula, in the state of Hidalgo, and terminate in Villa de Reyes, in the state of San Luis Potosi, transporting natural gas to power generation facilities in the central region of the country. The project will interconnect with TransCanada’s Tamazunchale and Tuxpan-Tula pipelines, as well as with other transporters in the region.

The pipeline company beat a subsidiary of Sempra Energy’s IEnova unit (Gas Pipeline Aguaprieta), which also bid on the project, as well as another bidder, Madrid-based Enagas Internacional. CFE said the Sempra unit’s proposal was disqualified because it did not meet all of the technical requirements of the tender.

CFE said the TransCanada proposal was the best offer on both a technical and financial basis.

Last November, TransCanada was awarded the contract for the Tuxpan-Tula pipeline (see Daily GPI, Nov. 11, 2015). By 2018, TransCanada said it will be operating six major natural gas pipeline systems in Mexico representing an overall investment of approximately US$3.6 billion.

Calgary-based TransCanada recently said it planned to sell up to a 49% stake in its Mexico pipelines to help finance its planned purchase of Columbia Pipeline Group Inc. (see Daily GPI, March 17).