TransCanada Corp. has delivered on a plan to sell its U.S. merchant power assets in the Northeast, announcing that it would earn $3.7 billion for the business to help pay for its acquisition of Columbia Pipeline Group Inc. (CPG). In another move aimed at driving growth, the company said it would retain its interests in a growing portfolio of Mexican natural gas pipeline assets. 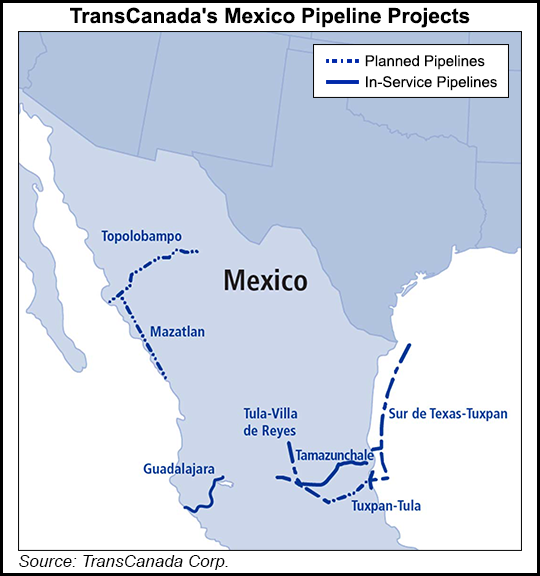 TransCanada reached a $2.2 billion agreement to sell 3,950 MW of generation assets in New York, Pennsylvania, Rhode Island and Maine to an affiliate of LS Power Equity Advisors LLC. Three of the four facilities being sold to are natural gas-fired, while the third in western Maine is a wind farm. Hydroelectric facilities in New Hampshire, Vermont and Massachusetts would be sold to an affiliate of ArcLight Capital Partners LLC for $1.065 billion in a separate transaction, with the remaining value expected to be realized through TransCanada’s power marketing business going forward.

Proceeds from the sales, which are expected to close next year, and the future realization of the value of the marketing business would be used to repay a portion of the $6.9 billion bridge loan used to fund the CPG acquisition. TransCanada completed the $13 billion acquisition in July (see Daily GPI, June 22; March 17). CEO Russ Girling said the divestiture would “enhance the stability and predictability” of earnings.

TransCanada also said it would retain full ownership of the Mexican gas pipeline assets, rather than sell a minority interest to fund the Columbia acquisition. The company owns and operates the Guadalajara and Tamazunchale pipelines, and is investing $3.8 billion to complete four others in the country and fund its interest in the Sur de Texas project. All of those assets are expected to be in-service by 2018, secured by 25-year take-or-pay contracts with the Comision Federal de Electricidad.

In order to maintain its ownership in the Mexican assets and to pay down the CPG bridge loan, TransCanada plans to offer about 55 million common shares at $58.50 each to raise $3.2 billion. Furthermore, it plans to purchase all the outstanding common units of Columbia Pipeline Partners LP for $915 million.

“The decision to acquire Columbia Pipeline Partners completes our review of strategic alternatives for our master limited partnership holdings following the Columbia transaction,” Girling said. “Through the acquisition of the partnership, our interest in the principal Columbia assets, Columbia Gas Transmission and Columbia Gulf Transmission, effectively increases from 91.6% to 100% and allows us to fully capture the growth associated with Columbia’s large capital program.”

CPG’s capital program ties into TransCanada’s plan for advancing $25 billion of near-term capital projects. The Calgary-based pipeline giant has already invested $7.5 billion, with the remainder to be spent over the next three years.