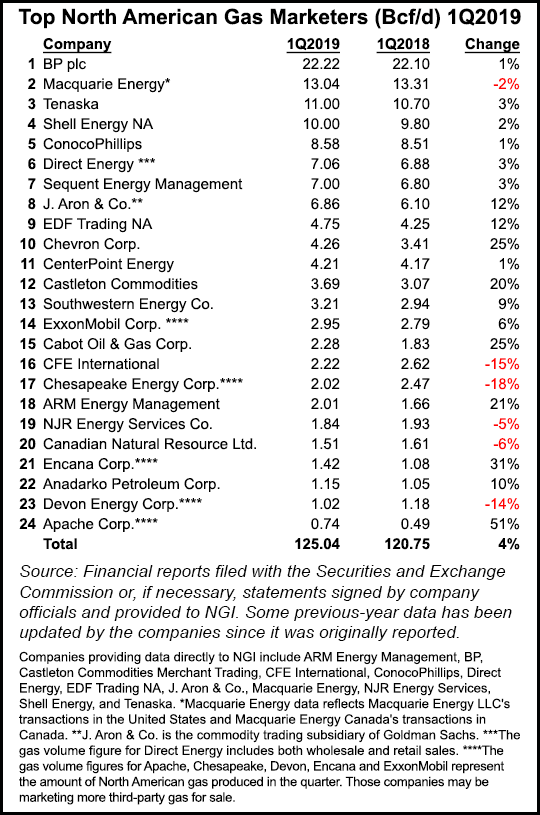 Nine of the survey’s Top 10 marketers and 18 companies overall reported higher numbers in 1Q2019 than in the year-ago period.

Perennial No. 1 BP plc reporting 22.22 Bcf/d, a 1% increase compared with 22.10 Bcf/d in 1Q2018. The London-based supermajor, which took over a massive Lower 48 position in March, said recently it isready to buildits oil and gas warehouse in the Permian Basin and beyond. BP beat Wall Street forecasts on higher 1Q2019 production and from “strong” trading results, including from its liquefied natural gas (LNG) investments.

At No. 5, ConocoPhillips reported 8.58 Bcf/d in 1Q2019, a 1% increase compared with 8.51 Bcf/d in 1Q2018. The Houston-based super independent grew its unconventional production in three Lower 48 unconventional plays, defined as Eagle Ford and Bakken shales and the Permian’s Delaware sub-basin, by more than 30% in the first quarter and held the line on capital expenditures and production guidance.

After months of year-to-year increases, natural gas marketers may be seeing the first hints of trouble on the horizon as operators in the prolific Appalachian Basin begin to slow what has been a robust production schedule. Signs of an anticipated slowdown in Appalachia were evident in Pennsylvania during the first quarter, as data released by the state’s Independent Fiscal Office (IFO) showed sequential natural gas production was essentially flat during the period. The IFO said unconventional gas production was about 1.655 Tcf during the first three months of the year, a year/year volume increased of 14.7%, but nearly flat from 4Q2018.

Oil and natural gas production in Ohio’s Utica Shale also declined in the first quarter as operators pared activity heading into the year in response to a variety of factors that are likely to see the trend continue. Utica gas production came in at 609.5 Bcf during the first three months of the year, down 8% sequentially from a record set in 4Q2018, according to the Ohio Department of Natural Resources. Sequential oil production, meanwhile, also declined by 13% to about 5 million bbl.

“Pipeline takeaway capacity out of the Appalachia has increased significantly during the last few quarters, as projects such as Nexus, Atlantic Sunrise, and Mountaineer XPress have added more than 4.0 Bcf/d of incremental capacity from the region,” said NGI’sPatrick Rau, director of strategy and research. “But local producers simply aren’t in the same hurry to fill that capacity as they were in years past.”

“Part of that quarterly decline is the result of bad weather and some infrastructure outages, but mainly, it is the result of producers showing much greater financial restraint, now that the investment community is demanding to see publicly traded producers generate free cash flow,” Rau said. “Production growth is the outcome of the new producer focus, and not the main goal.”

Appalachia’s gas-heavy exploration and production companies continue to face headwinds, with downward pressure on strip pricing expected to lead to even deeper spending cuts as they attempt to operate within cash flow and deliver on this year’s plans. While the first quarter saw a typical lift in average realized prices for many of the basin’s leading operators during the winter months, management teams see them again falling as usual with warmer weather.

Anadarko Petroleum Corp. reported 1.15 Bcf/d in 1Q2019, a 10% increase compared with 1.05 Bcf/d in 1Q2018. Anadarko has been the focus of takeover bids in recent months, first by Chevron and now by Occidental Petroleum Corp. (Oxy). Activist investor Carl Icahn, who holds an estimated $1.6 billion (5%) stake in Oxy, recently filed a lawsuit over the proposed acquisition of Anadarko, which he called misguided and overpriced. Oxy in May triumphed over Chevron in a bidding war for Anadarko and agreed to pay an estimated $57 billion.