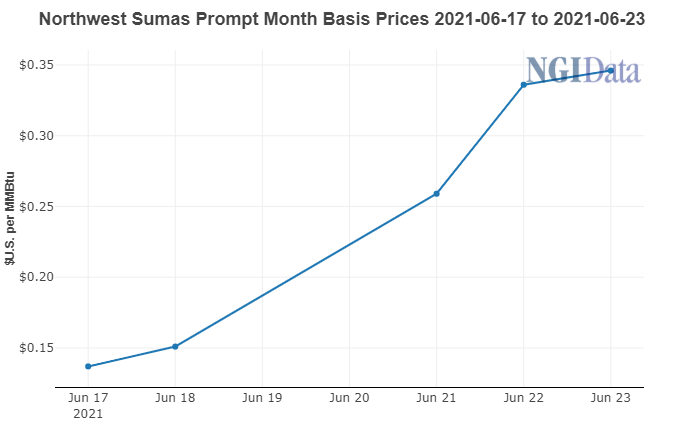 Spurred by a bullish surprise in the latest Energy Information Administration (EIA) storage report, July Nymex futures surged 8.5 cents higher to $3.418/MMBtu, advancing for a third straight session. The prompt-month found equally strong sentiment Friday, notching yet another day of gains when it finished at $3.496.

Accordingly, Henry Hub July fixed prices added 8.2 cents from June 17-23 to average $3.338 in NGI’s Forward Look dataset. That set the stage for another round of widespread gains for hubs throughout the Lower 48.

Amid the run higher in Nymex prices this week, ICAP Technical Analysis analyst Brian LaRose wasn’t quite ready to “rule out the possibility of a fake out rather than a break out. That said, bears would have to promptly send natural gas plunging below $3.217 to make the case for a top of some kind. Keeping our sights set on the dense cluster of objectives stretching from $3.500 to $3.636 otherwise.”

Bears were certainly on the defensive Thursday, sent scurrying by a reported 55 Bcf injection into Lower 48 gas stocks for the week ended June 18, an EIA print that came in below both estimates and historical norms.

“It is reflective of very tight supply/demand balances, and prices have responded,” Bespoke Weather Services said in a note to clients following the EIA report. “We knew this would be tight, but how tight was the question. The combination of low wind and low nuclear output last week accounted for more than we estimated, as it turned out. Next week’s number will easily be looser, but it’s unclear if it will be loose enough to put a halt to the rally.”

The weather picture as of Thursday remained “biased to the hotter side” overall, according to Bespoke.

The “best heat” was focused over the western United States, but the forecast still showed “occasional spikes of heat over into the Northeast as well,” the firm said. “…At this time, we have no signals that indicate any material change in pattern type. Tropical input can be a wildcard moving forward, though we see no notable threats on the horizon at this point in time.”

Prior to the EIA report, July prices had found upward momentum on a combination of recovering liquefied natural gas (LNG) feed gas demand and “growing prospects of a hotter July,” according to EBW Analytics Group analysts.

“LNG feed gas demand surpassed 11.0 Bcf/d on Wednesday for the first time in three weeks” amid the resolution of maintenance at the Sabine Pass LNG terminal, the EBW analysts said.

This coincided with expectations for rising power burns over the course of the week and a recent dip in production, the firm noted.

The latest forecast from DTN placed the most likely scenario for July at 371 cooling degree days (CDD), 13 CDD below the 10-year average and 43 CDD below year-ago levels, according to EBW.

“Recent warming trends for June and July, however, have been further reinforced by the progression of the Madden Julian Oscillation, indicating a return of heat for the Midwest and Northeast by mid-July, and potential acceleration in global wind speeds bringing heat to the South Central and Southeast,” the EBW analysts said. “If July weather turns hotter and shines a spotlight on bullish core fundamentals, the bullish optimism of recent trading suggests continued upward momentum remains possible for Nymex futures.”

Still, if the DTN forecast for July CDD were to materialize, it could mean a pause in the rally near-term, according to the firm.

In terms of notable regional forward price changes, hubs in the Rockies and Pacific Northwest saw rising basis premiums during the trading period, no doubt fueled by the intense heat expected to blanket the region in the days ahead.

Conditions were “setting the stage for a potential historic heatwave for the Northwest” heading into the weekend, according to the National Weather Service (NWS).

To close out the work week temperatures of around 10-20 degrees above average were expected. The weekend was expected to bring “numerous record highs,” the forecaster said.

“Excessive heat watches are currently in effect across all of Washington State, much of Oregon and infor far Northern California,” the NWS said Thursday.

Further out in the six- to 10-day window, there appeared to be little relief on the way for the Northwest, according to forecasting from Maxar’s Weather Desk.

Aside from the Southwest, “the rest of the West will remain under above to strong above normal temperatures, especially in the Northwest and northern Rockies,” Maxar said. “Northwest heat is not as strong” during this time frame “as the all-time record-challenging heat expected” in the one- to five-day period.

Appalachian hubs were among the other big basis movers during the June 17-23 trading period, with several locations closing the gap on Henry Hub by around 10-15 cents week/week. Eastern Gas South July basis increased 16.4 cents to trade 83.3 cents back of the hub, while Texas Eastern M-2, 30 Receipt gained 14.9 cents to trade at minus 93.3 cents.

Earlier in the week analysts at Wood Mackenzie observed production declines out of Northeast Pennsylvania associated with maintenance on the Tennessee Gas Pipeline (TGP) system.

Maintenance at TGP’s Station 321 has been in effect since June 14, “but planned maintenance at Station 325 began Tuesday, further restricting flows,” Wood Mackenzie analysts Laura Munder and Nicole McMurrer said in a note to clients.

Meanwhile, forecasts suggested downstream cooling demand in the Northeast and Mid-Atlantic was poised to rise by the end of the weekend, with population centers along the Interstate 95 corridor expected to see a return to above-normal temperatures.

Maxar was calling for highs in Boston to go from the low 70s Friday to the mid- to low-90s by Monday. New York City, Philadelphia and Washington, DC, were similarly expected to see highs climb from the 70s and low 80s into the 90s by the end of the weekend.