After sliding for much of the month, natural gas forwards rocketed higher during the Sept. 17-23 period as export demand steadily increased and on cooler changes to the long-range forecast. October prices jumped an average 17.0 cents during that time, while November launched 23.0 cents higher on average, according to NGI’s Forward Look. 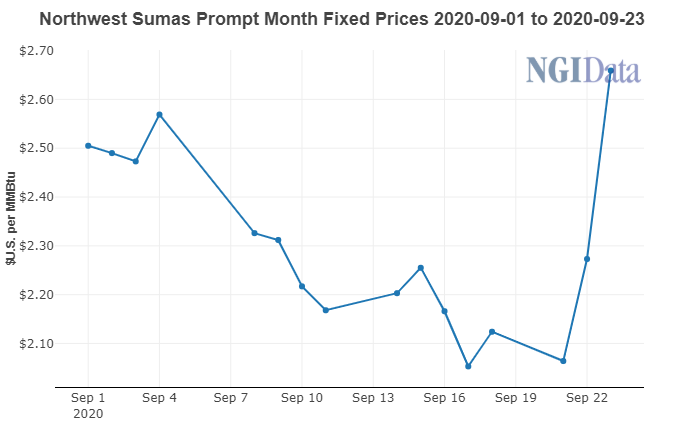 Strong, double-digit gains extended throughout the winter months, with the full November-March strip averaging 14.0 cents higher amid projections for lower production and stronger demand in the Lower 48 and abroad. Summer prices also increased, but gains were small, as were those seen further out the forward curve.

The past week’s overall gains were impressive, especially when considering the path to achieving them.

“Why such irrational trade the past month is difficult to pinpoint, but daily changes in liquefied natural gas (LNG) feed gas, production, and weather have certainly increased volatility,” said NatGasWeather. “In addition, the expiration of October 2020 options Friday and futures Monday are likely contributing to this week’s volatility.”

Meanwhile, Tuesday’s closing price of $1.835 was the first time since early August that the prompt contract had settled below $2.00. However, with a failed attempt to break through technical support around the $1.810 mark, futures exploded higher and October settled Wednesday at $2.125. The November contract soared to $2.794.

“I warned that a failure to break support had the potential to trigger a violent snap back to the upside,” said ICAP Technical Analysis’ Brian Larose. “While we did get the snap, the bulls did not do enough to signal they are back in control.”

The latest EIA data prompted a step in the right direction. On Thursday, the EIA reported that 66 Bcf was injected into storage inventories for the week ending Sept. 18. The build was below even the smallest of estimates ahead of the EIA report and was bullish to both the year-ago 97 Bcf injection and the five-year 80 Bcf average, according to EIA.

Bespoke Weather Services said it was unclear whether there was an implicit “make-up” in the latest EIA data. The prior week included a holiday, and LNG also was higher. “Either way, this number reflects very tight balances, the tightest we have seen in our data all summer long.”

Broken down by region, both the East and Midwest added 26 Bcf to inventories, while South Central stocks rose by 7 Bcf, all at nonsalt facilities, EIA said. Salt inventories were unchanged at 349 Bcf.

Total working gas in storage rose to 3,680 Bcf, which was 504 Bcf above year-ago levels and 407 Bcf above the five-year average, according to EIA.

“While next week should be looser thanks to lower LNG volumes, this tells us how tight we can be when LNG volumes are strong, though low prices last week also played some role, boosting power burns,” said Bespoke.

On Thursday, feed gas deliveries to U.S. terminals had climbed to around 5.7 Bcf, up nearly 0.5 Bcf day/day but still down from the nearly 8 Bcf/d in flows seen Sept. 18.

The day/day bump in feed gas demand, combined with the cooler weather outlook and supportive storage stat, boosted the October Nymex another 12.3 cents to settle Thursday at $2.248.

An early blast of crisp air could set the tone for what is expected to be a colder winter year/year. While too early to be “wildly bullish,” next week is set to bring an impressive shot of early chill into much of the nation east of the Rockies, according to Bespoke. This runs counter to the prevailing October pattern the firm has been expecting to see based on the La Niña signal, “although we only ‘see’ eight days into October at this point.”

Bespoke expected the pattern to turn warmer/milder after the opening third of October, “but signs of this have been getting pushed back later, so we have, at the least, clearly been too quick on the trigger, so far.

“The pattern has been deviating some from the ‘typical’ La Niña pattern each of the last couple of months, however, though it is too soon to tell if this is any sign for the upcoming winter,” the forecaster said.

EBW analysts warned that even if temperatures drop earlier than usual, more people working remotely may lead some cost-conscious customers to wait for colder temperatures to turn on the heat. The magnitude of the impact was unclear, but analysts said a slower-than-expected start to the heating season increased the risk of an early-November injection and could defer upside pressure for Nymex winter gas contracts.

By mid-November, however, the market is expected to shift from near-term storage overflow concerns to potential undersupply in a cold winter scenario, according to EBW. The end-of-March storage trajectory in the most-likely scenario remains slightly shy of 1,200 Bcf, roughly 150 Bcf below the typical early-winter market trajectory.

“If there is a cold burst in late October or early November as occurred in each of the past two years, reliability-focused local distribution companies have to plan for a worst-case scenario from a supply adequacy standpoint, lifting natural gas prices sharply higher to reduce price-induced coal displacement,” EBW said.

Regardless, the recent volatility along the Nymex futures curve is likely to stay for awhile, according to analysts. Wild swings over the past couple of months reflect the difficulties the market is having in accurately pricing natural gas, EBW said. That said, the odds are in bulls’ favor, especially as LNG rises, near-term storage containment concerns roll off and production declines as expected.

Extreme summer weather was refusing to loosen its grip on the West Coast, with temperatures forecast to remain in the 90s and 100s through the end of the month.

What’s worse, a cold front in store for the Pacific Northwest in the coming days could spawn winds farther south of the system, potentially sparking new fires across California. So far this year, more than 5,500 homes and businesses and 3.4 million-plus acres have burned as a result of the 7,900 fires across the state, according to the California Department of Forestry and Fire Protection.

“By late this weekend and into next week, a large heat dome is expected to build over the West,” said AccuWeather meteorologist Ryan Adamson. “This will mean the region will be dry, and it will likely be until at least some time in October before the entire West will be in line for any chance of widespread precipitation.”

With no signs of cooler weather yet in the forecast, forward prices across the West rallied strongly during the Sept. 17-23 period, according to Forward Look.