The benefits of shale gas are undeniable, but those “other Tcfs” — natural gas liquids (NGL) — are transforming the global marketplace and provide tremendous opportunities for the U.S. marketplace, an executive with MarkWest Energy Partners LP said in Philadelphia this week. 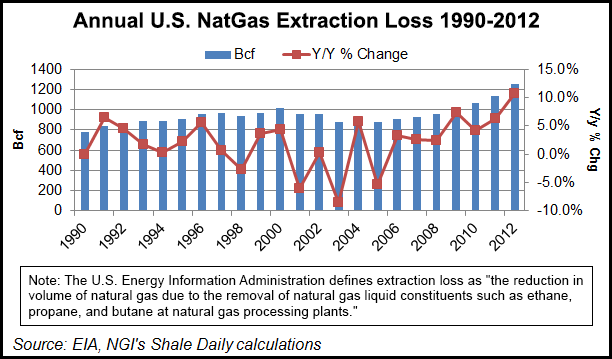 For midstreamer MarkWest, the NGL overflow is particularly tantalizing. The operator now has 22 major projects under construction, and in the Marcellus and Utica shales alone, the company plans to invest $20 billion to build facilities (see Shale Daily, Nov. 11, 2012).

“While we hear almost daily about the dramatic growth in shale gas production in North America, often expressed in Tcfs, what has received much less press…are what I call the other Tcfs…and the crucial role they play in revitalizing our economy,” Mollenkopf told the audience.

Based on analyses from various experts, total U.S. gas production is expected to jump by about 25%, he said. At the same time, NGLs produced with that gas are slated to jump by more than 50%. “But what is more interesting for us here in Philadelphia is that half the growth in NGLs is projected to come from the Marcellus and Utica shales here in the Northeast. That represents 300% growth in those basins alone.”

How can all of the NGLs be accommodated? Mollenkopf said to efficiently extract the NGL reserves, it’s going to take a big investment in pipeline, processing and fractionation infrastructure.

“With around 13 Bcf/d of new gas production and over 700 million b/d of new NGLs coming online in the Northeast shales alone by 2015, over 25 new gas processing plants and four to six new world-class NGL fractionation facilities must be built,” he said. That development will lead to hundreds of new miles of pipelines, compressor stations, rail and truck loading terminals, along with associated power generation facilities.

“We now have to find a home for 1.6 million b/d of incremental NGLs,” he told the audience. “In the near term, our primary solution is exports. In the long-term, we must construct downstream infrastructure to consume these valuable products at home.”

The most likely demand for natural gasoline, the heaviest NGL, is Canada, which has been imported to use as a diluent for heavy oilsands crude to flow through pipelines and refineries, Mollenkopf noted. Iso-butane is expected to be consumed in the United States. Meanwhile, normal butane exports are expected to grow significantly to supply global markets.

Propane, which used as home heating fuel and petrochemical feedstock, is the second largest component of the NGL stream, and Mollenkopf said a large amount of incremental propane will be exported. “In fact, over the past three years, nearly $1 billion has been invested in export terminal infrastructure in the Gulf of Mexico to export nearly 400,000 b/d of propane and normal butane to Latin America, Asia and Europe,” he said.

“In the future, we expect that more NGL exports will be used for petrochemical feedstock. In addition, plans are also under way to develop pipelines and export facilities for Marcellus and Utica propane in the Philadelphia area…”

The Mariner West pipeline “is about to come online and will transport ethane from the Marcellus shale to Sarnia, Ontario, Canada to feed existing and expanded ethylene plants (seeShale Daily, July 29). In the next two years, the Mariner East pipeline and Marcus Hook terminal right here in Philadelphia will allow for export of Marcellus and Utica ethane to hungry markets in northern Europe” (see Shale Daily, Sept. 4).

Recently the company announced it was forming a joint venture with its Markwest Utica EMG LLC affiliate and Kinder Morgan Energy Partners LP to pursue a $2 billion combination project including gas processing to serve the Marcellus and Utica, a y-grade NGL pipeline to the Gulf Coast, and then fractionation capacity, either developed by the JV or other parties, on the Gulf Coast (see Shale Daily, Aug. 9).

Given the projected export volumes, and even after planned downstream plants are in service, “there are clearly significant opportunities for expansion of the petrochemical industry in North America, and to our particular interest in the Northeast,” including ethane crackers and propane dehydrogenation plants.

“If we were able to develop additional petrochemical facilities to support the supply growth it would drive thousands of additional jobs and tremendous benefits for the country,” said Mollenkopf. “The other Tcfs are growing by the day, along with new opportunities and challenges, challenges that we are ready to meet.”