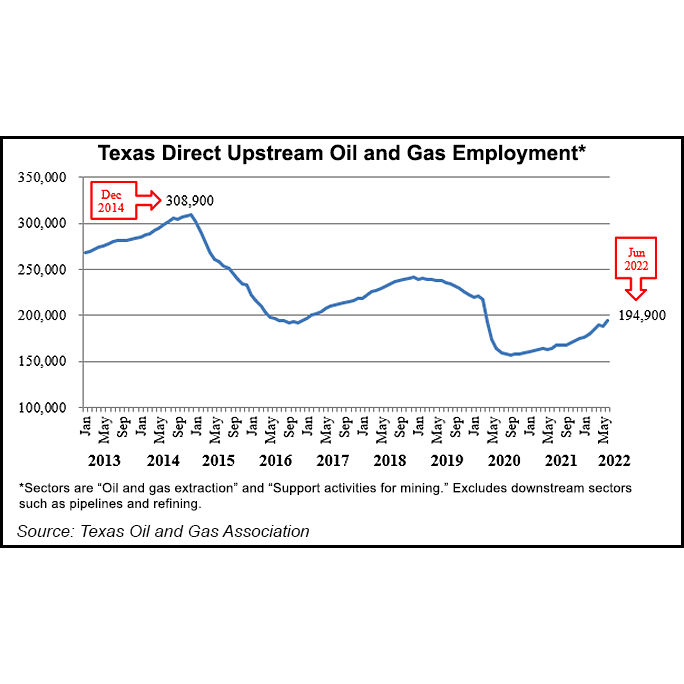 “As expected, the dip in May upstream employment appeared to be an anomaly, and June numbers reflect continued demand for talent and increasing exploration and production activities in the Texas oil and natural gas industry,” said TIPRO’s President Ed Longanecker.

TIPRO, which obtains its employment data from the U.S. Bureau of Labor Statistics, also noted that Texas’ June upstream job count represents a 31,000 year/year increase. The oilfield services (OFS) sector accounted for 22,700 of those new jobs, with the remaining 8,300 ascribed to oil and gas extraction, the trade group added.

The 31,000-job gain occurred in tandem with a 55% year/year increase in statewide drilling permits issued by the Railroad Commission of Texas.

TIPRO reported that the Houston metropolitan area, Texas’ largest region for oil and gas employment, added 2,000 upstream jobs from May to June to hit 67,000 direct positions.

The trade group noted the June Houston metro upstream job count reflects a 10,000-position year/year increase, with 5,600 of those jobs in OFS and 4,400 in extraction-related roles.

BKR In The Lead

“Of the top 10 companies listed by unique job postings last month, six companies were in the services sector, followed by two companies in midstream and two in oil and natural gas extracting,” said TIPRO.

The association, which analyzes Texas’ oil and gas industry across 14 specific sectors, said support activities for oil and gas operations showed 3,247 unique job listings in June – the most for any category. Oil and gas field machinery and equipment took the second-highest spot with 1,547 postings, followed by crude petroleum extraction with 1,431 listings.

Since hitting a low point in September 2020, Texas upstream employment has added 37,900 jobs at an average rate of 1,805 jobs/month, noted the Texas Oil and Gas Association (TXOGA).

“The Texas oil and natural gas industry continues to respond to meet the energy needs of Americans and allies across the globe,” said TXOGA’s President Todd Staples. “Demand for oil is forecasted to continue growing in 2022 and into 2023, so our nation must support certainty and consistent opportunities for domestic production, pipelines and processing of the products our nation and the world depend upon.”