Oil production in Texas continued climbing during May, while natural gas output trended down as it has for much of this year. 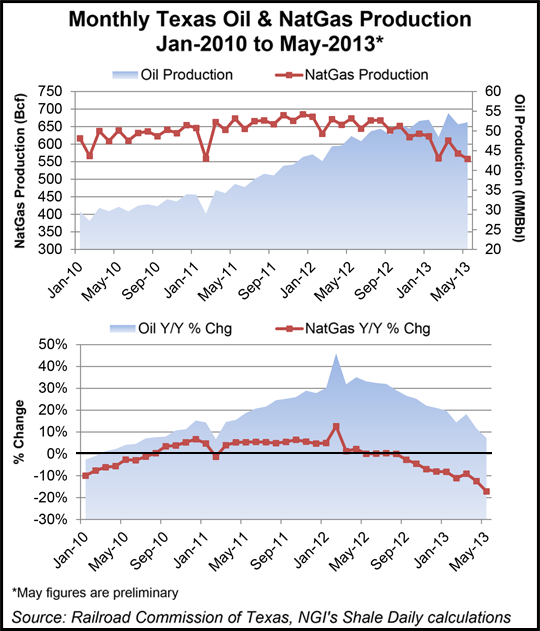 According to the latest data available from the Railroad Commission of Texas (RRC), the Lone Star State produced 52.22 million bbl of crude oil in May, up from 51.69 million bbl in April. Every month this year crude oil production has surpassed that during the corresponding year-ago period.

During the first five months of this year, Texas crude oil production totaled nearly 259.71 million bbl. During all of 2012 crude oil output was 579.26 million bbl.

The Eagle Ford Shale gets much of the credit for growing Texas oil production. A Bloomberg analysis of RRC data representing the majority of the play showed that Eagle Ford oil production climbed 58% in May from a year ago to 581,923 b/d.

Natural gas is a different story. In May the state produced 557.90 Bcf, down from about 573.43 Bcf in April. Every month this year natural gas production has failed to reach levels of the corresponding year-ago period, according to the RRC data.

During the first five months of this year, Texas natural gas production totaled 2.92 Tcf, and during all of 2012 natural gas output was nearly 7.83 Tcf, according to RRC data.