For the first four months of 2022, liquefied natural gas (LNG) exports from Texas’ Port of Corpus Christi were up 56.2% over the previous tonnage record set in January through April 2020, the port authority said Monday. 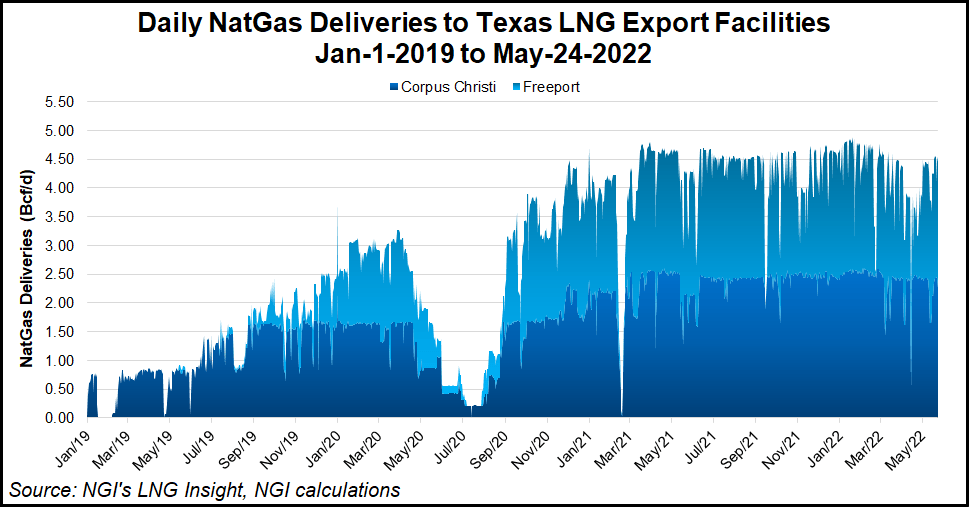 The Port of Corpus Christi’s CEO Sean Strawbridge said “we have the table set for meeting the increasing energy demands of the global markets both today and well into the future.”

LNG exports totaled 5.4 million tons in January through April of this year.

Cheniere plans to make a final investment decision this summer on an expansion project that would add 10 mmty of liquefaction capacity at CCL.

Bolstering the case for the CCL expansion is a supply deal that Cheniere made with EOG Resources Inc. in February.

The 34 million tons of crude oil that moved through the port from January through April represented an increase of about 9% from the corresponding period in 2020, the port authority said.

Refined product exports, which totaled 10.6 million tonnes during the first four months of this year, are up 17.8% from the early 2020 level.

“I commend our customers for their continued growth and recovery from what was arguably the largest demand destruction period in modern history as a result of the pandemic,” said Strawbridge.