A plan to build the first liquefied natural gas (LNG) bunkering terminal along the U.S. Gulf Coast is progressing through the permitting process by initiating a water suitability assessment with the U.S. Coast Guard (USCG). 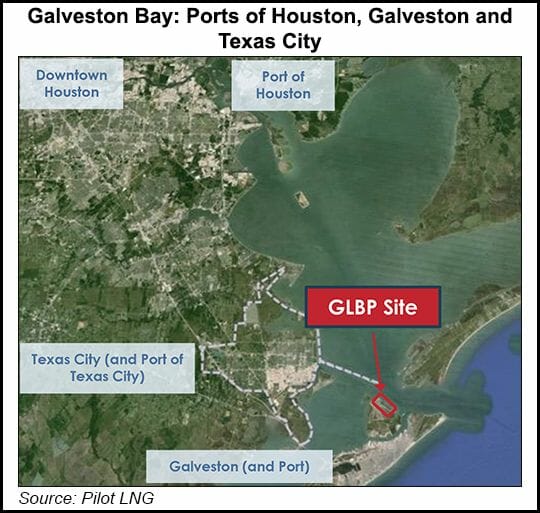 Pilot LNG LLC’s proposed Galveston LNG Bunker Port (GLBP) project would comprise an LNG production vessel that would be permanently moored off Pelican Island, TX. The island is in Galveston Bay, one of the busiest marine corridors in the United States, providing access to the ports in Houston, Galveston and Texas City.

The project, which would have production capacity of 500,000 tons per year, equivalent to about 64 MMcf/d of gas, plans to make a positive final investment decision in late 2021 or early 2022 after getting regulatory approvals. Operations are slated to begin in 2024.

Pilot LNG earlier this month submitted a letter of intent and a preliminary water suitability report to the USCG to initiate the evaluation, management said. The review would assess the potential safety, security, marine and economic impacts of expected marine traffic from the project. Bunker barges would load at the terminal and distribute LNG fuel to ships, but the project has not yet determined if it would operate its own fleet.

The bunker port project in October reached a preliminary long-term supply deal with GAC Bunker Fuels, an affiliate of the GAC Group that procures fuel for customers in the shipping industry. The heads of agreement outlined the terms for Pilot to provide LNG bunker fuel to GAC customers on a delivered ex-ship basis.

The project in July applied for key permits from the U.S. Army Corps of Engineers.

Eagle LNG Partners Jacksonville LLC also has proposed building and operating a terminal and export facility in Jacksonville.Demand for LNG bunker fuel is poised to grow. International regulators have tightened emissions standards, and the maritime industry has increasingly turned to LNG as a fuel source because of its lower emissions profile and cost competitiveness. The International Maritime Organization has established the goal of reducing greenhouse gas emissions from shipping by at least 50% by 2050 compared to 2008, and many LNG-fueled ships are expected to be produced going forward.