Decades of oil and gas drilling, and the jobs and benefits it provides, are engrained in Texas culture, and it’s a way of life that Pennsylvanians now are attempting to assimilate, but residents of both states continue to reconcile the advent of shale gas drilling, according to a survey of 1,600 adults.

Nonprofit Resources for the Future (RFF) economists have been studying the impacts of unconventional drilling for several years, drawing on expert data to compile several reports used by industry and regulators. RFF on Thursday published one report on the impact of shale gas drilling on states (see Shale Daily, June 28). A separate report, “Managing the Risks of Shale Gas,” offers other key findings, including a recent survey of Pennsylvania and Texas residents.

The two states’ residents were quizzed about their knowledge of shale gas development activities and their attitudes about potential risks. RFF wanted the answer to three key questions:

Because the actual risk levels of shale gas drilling haven’t been conclusively determined, the survey examined the public’s preferences under three sets of baseline risks, that is, those risks that exist if government enacts no more regulations and industry undertakes no more voluntary actions. Respondents were asked to choose among several potential government programs associated with a cost for reducing risks to groundwater, surface water, air pollution, community disruption and habitat fragmentation, or to choose no program at all — for zero costs.

“Most respondents are worried about environmental risks, especially those related to groundwater and surface water, but a fraction are not concerned about any risks,” said RFF’s Juha Siikamaki, who wrote about the results of the survey with Alan Krupnick, who directs RFF’s Center for Energy Economics and Policy. “In spite of being worried about risks, most respondents support shale gas development, implying that they want it done, but safely.”

In both Texas and Pennsylvania, groundwater is a major concern. Households in Texas and Pennsylvania are willing to pay around $20-30/year to eliminate risks for 1,000 drinking water wells, but “households in Texas have greater willingness to pay.” Both states’ respondents are concerned about risks to surface water and wildlife habitat, but again, “the Texans surveyed are willing to pay more for reducing these risks in both cases.”

Neither Texans nor Pennsylvanians surveyed were willing to pay anything to reduce community risks, such as the time lost from increased truck traffic and road congestion. That may be because the population-weighted sample primarily included urban dwellers, Siikamaki said. Air quality effects, however, are a concern in both states, with a willingness to pay about the same.

Respondents were offered three “information treatments” to describe gas drilling risks: one from the website of the American Petroleum Institute (API), another from the websites of several environmental nongovernmental organizations (NGO) and a neutral description written by RFF researchers. Respondents’ attitudes are affected by the information they receive, which suggests that those opposed to shale drilling, such as NGOs, “may be succeeding in eroding support for shale gas development,” said Siikamaki. “Information provided by industry appears to change some attitudes as well, but is just about as likely to make people more opposed to development as more supportive of development.”

Carnegie Mellon University’s Mitchell Small, who participated in a panel discussion, said one way to ensure more support among all stakeholders in a drilling program could be through comprehensive drilling plans.

“These would be groups including industry, state government, local and or county officials, and other local stakeholders who would get together and come up with a plan” together in which they all could take ownership. The diverse group would decide “where are the good areas for drilling, what types of monitoring are needed? It could not be too onerous, because if creating a plan takes too long or it’s too expensive, it won’t work.”

Some type of “coordinating organization” among regional states also might work, said Small. “It might be a better way to share information on regulatory approaches,” he said, noting that the Environmental Protection Agency now has five regional planning organizations for air planning that allow states to share best management practices.

Differences in how oil and gas activity is perceived in Texas and Pennsylvania may never be reconciled, Small said.

“It’s that kind of attitude [in Texas] where understanding oil and gas better is the role of the community, not just what an individual landowner is going to benefit from…I have a friend who is a landowner in Pennsylvania who said he would like to see some [oil and gas] money going to the community so that if one of his neighbors got a goldmine, everyone else wouldn’t feel like they got the shaft,” Small said, paraphrasing the title of an old country song. “These are the types of things you could do that would always be helped by comprehensive drilling plans as well.” 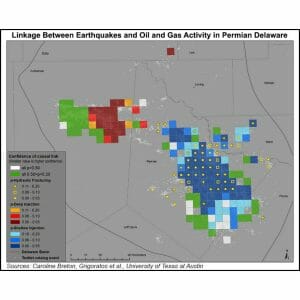