TC Energy Corp. is strengthening its commercial ties with Mexico’s largest natural gas consumer and working toward the completion of multiple pipeline projects in the country. 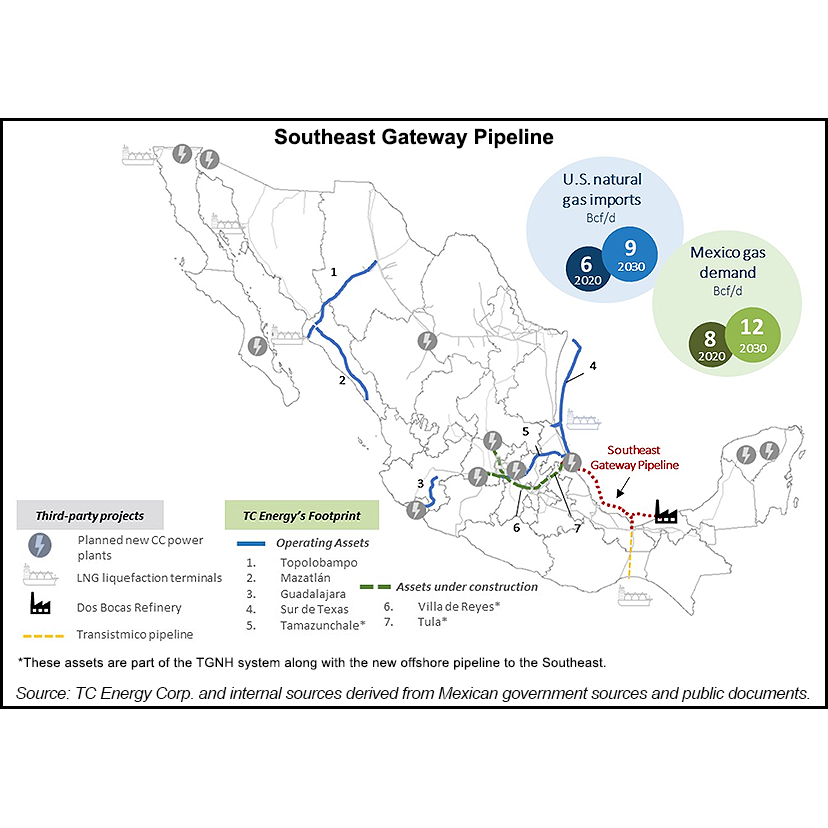 The consumer is state power company Comisión Federal de Electricidad (CFE), whose demand averages about 4 Bcf/d, nearly all of which comes from the United States.

In a call to discuss the Calgary-based company’s third-quarter earnings, CEO François Poirier called 2022 “a transformative year for our Mexico business.”

He highlighted an agreement reached with CFE in August to complete and develop natural gas infrastructure in Mexico’s central and southeast regions.

Projects covered in the agreement include the 1.3 Bcf/d, 444-mile Southeast Gateway offshore pipeline, which is expected to be in-service by mid-2025, as well as the final sections of the Tula-Villa de Reyes pipelines.

“We are off to a strong start and are already making meaningful progress on the project,” Poirier told analysts in reference to Southeast Gateway. “I’ll remind you that over 70% of the project costs are secured under fixed-price contracts that give us greater certainty around cost and schedule.”

He added, “Our relationship with the CFE has moved to a whole other level from a positivity standpoint, having them as a partner in addition to as a customer. We’ve seen the level of collaboration with them do nothing but improve over the last few months.”

TC management said the agreement with CFE “further demonstrates how we are leveraging our differentiated North American strategy to deliver energy solutions across our extensive footprint. Once in service in mid-2025, the Southeast Gateway pipeline is expected to benefit millions of people through increased access to clean, reliable and affordable energy.”

The company added that, “In order to support execution of this accretive project, we issued C$1.8 billion in common equity to provide certainty around our go-forward funding plan. In addition, we resolved international arbitrations with the CFE on the Villa de Reyes and Tula pipeline projects allowing us to earn a full return on and of all previous capital invested.”

TC placed the north section of Villa de Reyes pipeline and the east section of the Tula into commercial service during 3Q2022.

The lateral and south sections of Villa de Reyes, meanwhile, are expected to begin commercial service in 2023, the company said. “Additionally, we have agreed to jointly develop and complete the central segment of the Tula pipeline,” subject to a final investment decision.

The August agreement restructured the transportation service agreements (TSA) for TC’s pipelines in central Mexico under a single, U.S. dollar-denominated contract that extends through 2055.

“Upon in-service of the Southeast Gateway pipeline, the CFE’s equity interest in TGNH would equal 15%, which would increase to approximately 35% upon expiry of the contract in 2055,” TC said. “Regulatory approvals related to the CFE’s equity participation in TGNH are expected to take up to 24 months.”