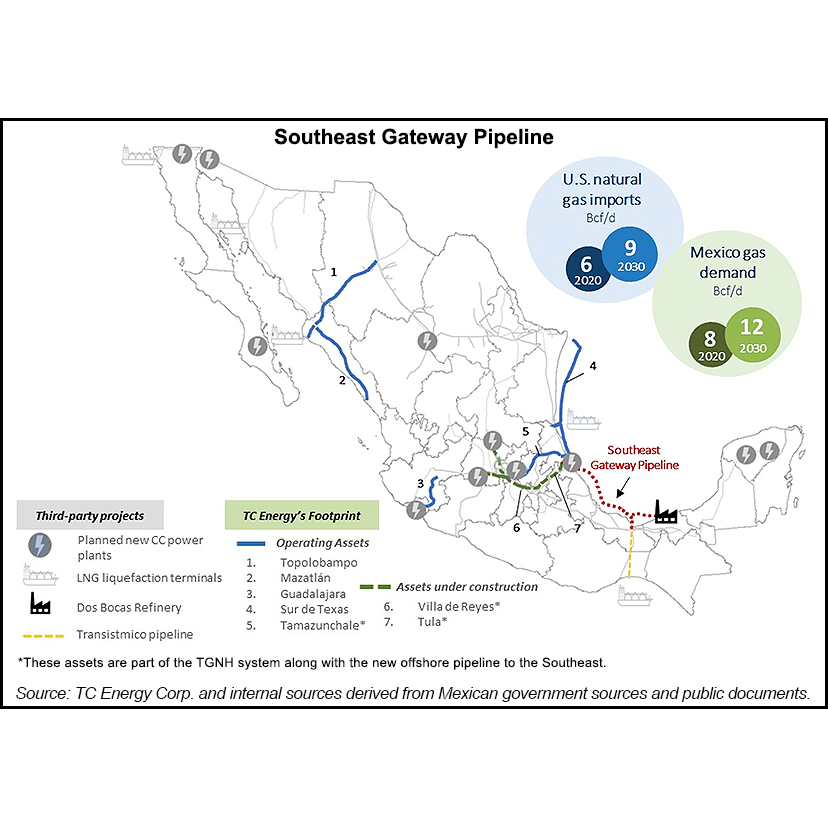 The project is anticipated to be in service by the middle of 2025. The pipeline would essentially be an extension of the 2.6 Bcf/d Sur de Texas-Tuxpan pipeline, which moves natural gas supply from basins in Texas to southern Mexico. That pipeline was placed into service about three years following FID, TC said.

Mexico President Andrés Manuel López Obrador has made it a top priority to develop the south and southeastern portion of the country through big ticket infrastructure projects.

The Southeast Gateway Pipeline project would provide natural gas supply to underserved areas including the Yucatán Peninsula. It could also feed gas into the proposed Jaltipán-Salina Cruz cross-isthmus pipeline. Costs for the project would be shared, TC said.

TC, a major infrastructure developer in Mexico, currently transports 15% of all natural gas in the country. The Calgary-based pipeline giant expects Mexico natural gas pipeline imports to increase to 9 Bcf/d by 2030, from 6 Bcf/d in 2020. The company also sees Mexican natural gas demand rising to 12 Bcf/d from 8 Bcf/d over the same period.

TC and CFE also have launched a public-private partnership to develop other natural gas infrastructure throughout Mexico.

The alliance would lump together the TC’s Transportadora de Gas Natural de la Huasteca (TGNH) assets, including the Tamazunchale, Tula-Villa de Reyes, and Tuxpan-Tula pipelines. These pipelines would fall under a single take-or-pay transportation service agreement through 2055.

TC CEO François Poirier expressed appreciation that the company had been selected for a strategic partner in Mexico, the “first-of-its-kind in the CFE’s 85-year history. Together, TC Energy and the CFE will develop critical energy infrastructure to serve the growing central and southeast regions of Mexico.

“The Southeast Gateway Pipeline will be TC Energy’s second marine natural gas pipeline in Mexico, connecting to the coastal regions of Veracruz and Tabasco, and is another prime example of our ability to originate world-class projects that offer incremental growth to our long-term outlook,” Poirier said.

TC and the CFE also agreed to terminate their suspended international arbitrations related to the Tula-Villa de Reyes and Tuxpan-Tula pipelines. TC would earn a return on all previous capital invested.

The entities also agreed to partner on completing the stalled Tuxpan-Tula pipeline through construction of the central segment, subject to sanctioning at the end of the year.

“The CFE will take an active role in fulfilling land, community and permitting responsibilities, leveraging upon its experience operating,” TC said.