After seeing better-than-expected growth in gathering volumes in the Permian Basin, Targa Resources Corp. is planning for another processing plant in the Midland sub-basin. 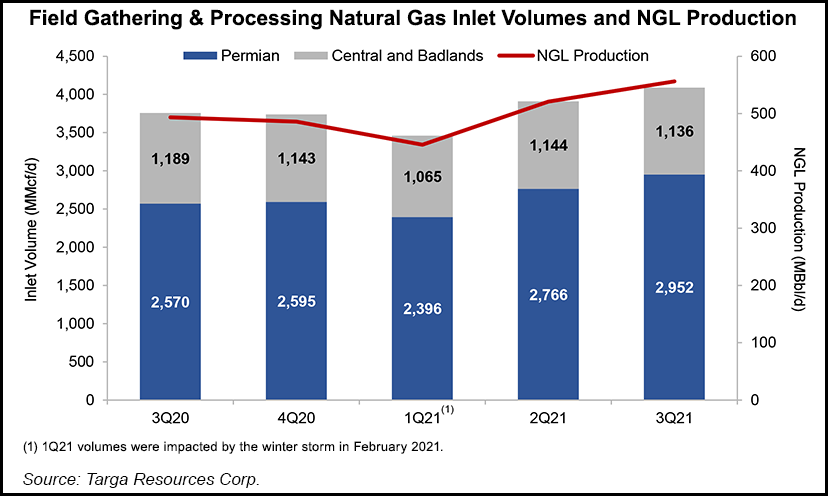 The Houston-based midstreamer reported that system inlet volumes rose 7% sequentially in the third quarter, with total Permian inlet volumes reaching a record 2,952 MMcf/d. Management now expects volumes this year to exceed the top end of its previously disclosed 5-10% growth over 2020.

“With robust activity levels expected to continue into next year and beyond, we are evaluating the timing of our next Midland plant, after Legacy, and are now ordering long lead items,” Meloy said during the 3Q2021 earnings call.

It’s not clear when the additional plant may be needed, and Targa is still in the evaluation stage, he said. However, growth capital expenditures in 2022 are expected to be higher than the projected $450 million this year, largely because of the new plant, well connects and compression. Targa plans to issue its 2022 operational and financial outlook in February, with details on the timing of the plant expected then.

Completions and activity also continue to ramp in the Permian Delaware, but Targa has adequate processing capacity to accommodate the anticipated near- to medium-term growth.

President Pat McDonie of Gathering & Processing (G&P) said the Permian overall is seeing steady growth from large public exploration and production companies, and an uptick in activity from smaller producers. The rig data indicates “there’s probably a little more lag in the Delaware” than in the Midland. However, “in our conversations with those parties we’ve contracted with, they’re definitely ramping up in some form or fashion…not a crazy ramp-up, but good, thoughtful investment of capital.”

Even with Heim and other Midland plants running near capacity, Targa has the ability to achieve some additional capacity to meet producer demand, according to McDonie. The executive said Targa has at least 10% of incremental capacity above nameplate “that allows us to go ahead and continue to handle all of our producers’ volumes while we’re building that next plant and putting that incremental capacity in place. Some of our facilities have capabilities beyond that 10%.”

Meanwhile, a long-term power purchase agreement is in place with Concho Valley Solar to provide renewable energy to its G&P infrastructure in the Permian. Concho Valley, a joint venture (JV) between Merit SI and Komipo America Inc., recently began building the 160 MWac solar project near San Angelo, in Tom Green County, TX. The project would use bifacial solar photovoltaic modules.

“We continue to review and pursue other economic opportunities to advance our sustainability objectives that complement our core competencies and infrastructure footprint,” Meloy said.

Natural gas liquids (NGL) also were a bright spot for Targa in the third quarter. The Grand Prix NGL pipeline and the fractionation complex in Mont Belvieu, TX, operated at record levels during the quarter, primarily because of the higher supply volumes from its Permian G&P systems. The midstreamer transported a record 417,000 b/d to Mont Belvieu, while fractionation volumes averaged about 662,000 b/d.

On Thursday, the company said it was gauging shipper interest for an extension of Grand Prix that would reach into the Anadarko Basin in southern Oklahoma and link to Targa and Williams’ Bluestem Pipeline, which extends into Kansas. An open season is set to continue through Dec. 17.

Looking ahead to 2022, Targa plans to focus on simplifying its capital structure and returning more capital to shareholders. CFO Jennifer Kneale said the company expects to repurchase in January its interests in its development JVs from investment vehicles affiliated with Stonepeak Infrastructure Partners for around $925 million. These include owning 25% of Targa’s interest in the Gulf Coast Express pipeline that began service in 2019; 20% interest in Grand Prix; and 100% of an additional fractionation train at Mont Belvieu.

Targa also intends to recommend a dividend increase to $1.40/share. It plans to remain “opportunistic” on share repurchases, and “we’ll continue to invest in attractive high returning growth opportunities that leverage our integrated system,” Kneale said.

“Our updated capital allocation strategy aligns well with these priorities while increasing the amount of capital that we can return to our shareholders over time,” added Meloy. “The tailwinds of the current commodity price environment are welcome, but more importantly, the strength of our balance sheet will allow us to capitalize on opportunities across cycles, and maintaining that flexibility is a priority to our strategy going forward.”