Targa Resources Corp. is relocating a cryogenic natural gas processing plant to the Permian Basin from North Texas to boost what it said is much needed capacity in the region. 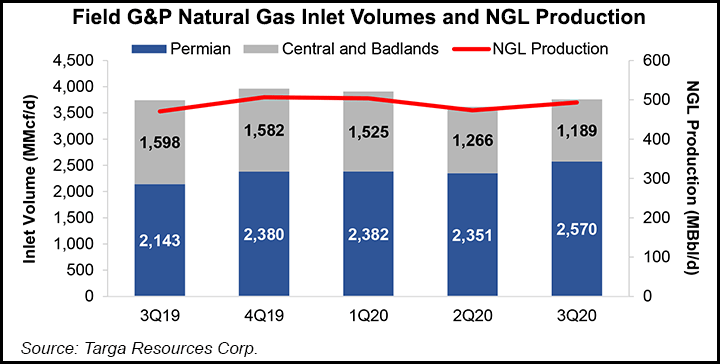 The Houston-based midstream operator said the Longhorn plant would be moved to the Midland sub-basin in West Texas to accommodate increasing production. The 200 MMcf/d plant is to be renamed the Heim plant, after Targa’s founding COO, Michael Heim.

The plant is expected to begin operations in late 2021. Targa estimated the cost to relocate the plant is about $90 million. CEO Matthew Meloy said it would drive “attractive returns” resulting from capital savings combined with the incremental fee-based margin earned through the logistics and transportation assets.

“This type of spending is in line with our strategy going forward to focus our capital allocation on high returning projects that leverage our integrated midstream platform,” the CEO said during a third quarter earnings call earlier this month.

Targa recently brought online the 250 MMcf/d Gateway plant in the Midland, where utilization quickly ramped up and necessitated additional capacity, according to Meloy. The midstreamer expects to see inlet volumes grow close to the original 2020 plan as a result of a quicker-than-expected rebound in prices and producer activity.

Permian volumes during the third quarter increased 9% sequentially, even though the basin experienced a 2% decline in associated gas production during the period.

“This points to the strength of our overall footprint in the Permian continuing to outperform basin-wide results,” Meloy said.

The relocation of the Heim plant highlights Targa’s engineering teams’ creativity in looking at the company’s asset footprint and determining whether some assets may be better utilized elsewhere, according to CFO Jennifer Kneale.

Optimizing assets rather than selling them is the way Targa is doing business at the moment, Kneale said. The company is “very comfortable” with the asset portfolio it has in place, not only in the Permian but also in the Bakken Shale and in the Midcontinent.

“Our teams have done a wonderful job of trying to extract savings from those assets” and “optimize the positions that we have” to make them “more of an attractive cash flow profile than it would otherwise be,” she said. “Ultimately, we’ll continue to look at whether we’re the right long-term owner of assets as part of our job.”

No assets are being actively marketed, but the CFO said, “of course, everything has to be on the table at all times,” and it would consider inquiries.

Mergers and acquisitions also appear to be off the table. Meloy said the company remains focused on investments in organic growth and doesn’t “lack a key piece of the puzzle that we’re looking to bolt on that would make Targa complete.

“We have an integrated platform. We have a really good Permian position,” and so the company is “servicing the existing assets and customers that we have. There is a pretty high hurdle for us to go look at something that would be a bolt on,” the CEO said.

The active number of U.S. fracture spreads jumped nearly 15% month/month in February, driven by strength in the Permian Basin, even as “Snowvid” shut in wells and sent crews packing, according to Tudor, Pickering, Holt & Co. (TPH). Data compiled by TPH indicated that oilfield services (OFS) operators increased the number of crews working in…