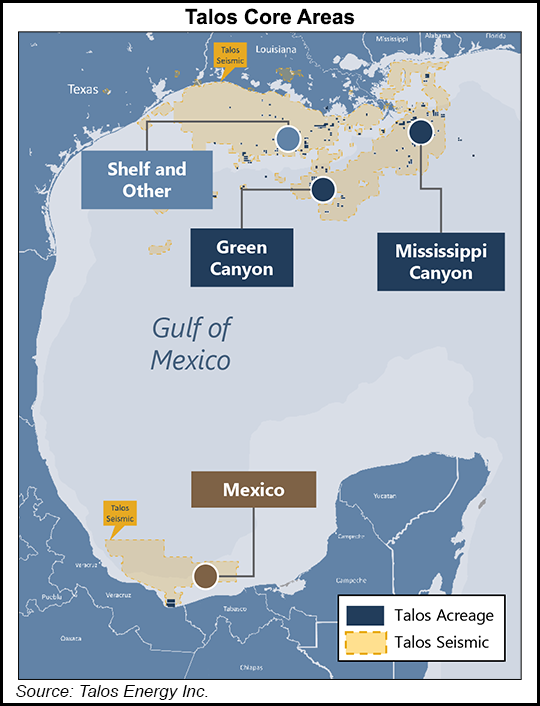 “I’ve always found comfort in that. That statement has been consistent.”

What’s more, Duncan said, due to budgetary constraints, Pemex alone will be unable to make the investments required to keep the country’s oil and gas production afloat.

He said the members of Amexhi, Mexico’s main oil and gas trade organization, have invested about $14 billion to date in the country, with another $45 billion pending, “so call that close to $60 billion.”

He added, “So it’s impossible to not think about the contribution of the private sector. At a minimum, they’re doubling up what Pemex can go out there and do, and we want Pemex to do very well.

“We want them to be successful, but know that the private sector is also doubling down on investment in offshore Mexico.”

A Talos-led consortium announced the Zama oil discovery in 2017 at shallow water Block 7, which was awarded through Mexico’s Round 1.2 bidding process in 2015.

Part of the Zama deposit is located in acreage controlled by Pemex, which is why Pemex and the Block 7 consortium signed a pre-unitization agreement in 2018 under the previous government to chart a path forward for jointly developing the resource.

Pemex has yet to conduct the necessary appraisal drilling to determine the reservoir’s extent within the Pemex block.

On July 7, the consortium and Pemex received instruction from Mexico’s energy ministry (Sener) to submit a unitization and unit operating agreement to Sener for approval within 120 business days.

“In Mexico, we are making progress on our Zama project by finalizing engineering design while continuing to work with Pemex on unitization as part of the formal instructions to reach an agreement in the next six months,” Duncan said.

He told analysts, “With respect to Zama, I think our big push and our big statement is we think we’re well prepared to get that production online in this president’s administration, and we just keep pounding and pounding that message while we continue to negotiate with Pemex.”

He added, “It’s an amazing discovery. We’re lucky to have it in our portfolio.”

Despite Pemex debt being downgraded to junk status by two of the major credit rating agencies, and a subsequent downturn in crude oil prices caused by the Covid-19 pandemic, López Obrador has maintained his public skepticism about the energy reform’s ability to deliver results, and has refused to resume bid rounds or farmout tenders for working interests in Pemex’s vast portfolio.

The best estimate of the area’s gross resources is over 100 million boe, Duncan said, highlighting, “Xaxamani is our second major discovery in offshore Mexico and highlights our capabilities to drive exploration success in basins beyond the U.S. Gulf of Mexico.”