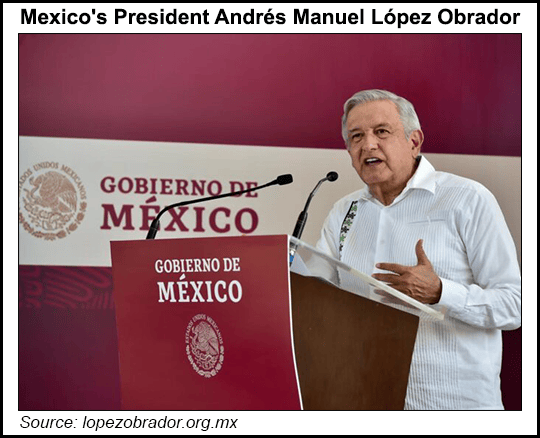 The eight-page memorandum, reviewed by NGI’s Mexico GPI, was dated July 22. It explicitly criticizes the 2013-2014 landmark energy reform, arguing that it served only to prop up “private businesses and corrupt politicians.”

The document comes to light weeks after former Pemex director general Emilio Lozoya was extradited from Spain and returned to Mexico to face corruption charges. López Obrador, often referred to by his nickname AMLO, said part of what will be revealed in Lozoya’s testimony is that the energy reform was forced through under corrupt means.

“The previous government tried to provide legal grounds for pillage, calling it energy reform, which was approved by a constitutional amendment, and achieved by bribes given to the majority of lawmakers and sold through the deceptive press to the population,” López Obrador said in the memorandum.

“The country gained nothing,” from the reform, and “Pemex and CFE were left almost in ruins.”

During a press conference last week, López Obrador said he would consider pushing for a constitutional amendment to undo the energy reform, but only in 2022, after next year’s July midterm elections.

The wording in the memorandum was aimed specifically at the regulators who have been set up in Mexico to foster free market competition.

“I maintain that the regulatory organisms created during the neoliberal period should adjust to the new energy and economic policy,” the memorandum indicated, “and that their mission should be to work together with the Energy Ministry, Pemex and CFE to rescue the petroleum and electric power industries of the nation.”

Last month, former commissioners at Mexico’s Comisión Reguladora de Energía (CRE) said the institution was losing its independence and failing to carry out its constitutional mandate under the current government.

Similar changes have taken place at upstream regulator Comisión Nacional de Hidrocarburos (CNH), where the government has ordered a halt to the oil and gas auctions that ushered in billions of dollars in private investment during the previous government headed by Enrique Peña Nieto.

The Wilson Institute’s Duncan Wood told NGI’s Mexico GPI that the president’s memorandum showed that “at the least he respects institutions. He’s remade the regulators over the last couple of years. They are his picks. But at the very least the memorandum shows he understands regulatory approval matters.”

Analysts suggested that the timing of the memorandum could indicate that López Obrador is hardening his stance as he looks to the legislative elections set for next summer.

A counter reform would require a 66% majority in both houses of congress. López Obrador’s ruling Morena party has 60% of the seats in the senate. Next year’s midterm elections will see the entire lower house renewed, where the Morena coalition controls 65% of seats.

“Fundamentally, our plan, backed by democratic vote of the Mexican people, consists in going back, without ignoring the new realities, to the policy adopted by presidents Lázaro Cárdenas del Río and Adolfo López Mateos,” the president said in the memorandum, referring to populist leftwing 20th century presidents who championed resource nationalism.

In a research note last week, analysts at political risk group Eurasia Group said the “fear of economic instability and external pressure, especially from the U.S., will likely prevent him from attempting to change the constitution,” adding that there was a 65% probability that the energy reform would remain in place.

While there is a clause allowing Mexico to change the constitution under the newly signed United States-Canada-Mexico Agreement, aka the USMCA, investor protections were also strengthened in comparison to the original North American Free Trade Agreement, analysts noted.

Still, López Obrador’s “desire to change the constitution would increase if Pemex’s problems intensify and, more importantly, if he feels politically challenged. López Obrador is likely to respond to falling popularity and growing opposition by doubling down on goals and objectives, rather than moderating and changing course.”

Natural gas analyst Eduardo Prud’homme told NGI’s Mexico GPI that the memorandum “is asking the CNH and CRE if it’s feasible for the government’s policy to work without getting rid of the reform. If the assessment is ‘no,’ he would use it as a starting point of a campaign against a reform. It’s risky, but he’s taking more risks because he is in a complex situation.”

The International Monetary Fund is projecting a 10.5% economic contraction this year in  Mexico, where the country has seen close to 50,000 deaths from the coronavirus, the third highest in the world after the United States and Brazil. Meanwhile the president’s approval rating, while still high, has dipped to below 60% from 80% in his first few months in office.

López Obrador said in the memorandum he would respect all oil and gas contracts awarded under the previous government. The memorandum also stated that private sector companies could continue to find opportunities in Mexico in conjunction with CFE and Pemex as well as take part in service contracts and tenders.

“When he was in Washington recently, AMLO received the message loud and clear that U.S. companies were worried about their investments,” Wood said of the president’s trip to see President Trump. “He does say he wants to respect contracts. He doesn’t want to violate the rules of USMCA by expropriating companies.”

The memorandum also would adjust Mexico’s oil production goals. Mexico will now aim to hit oil production of 1.8 million b/d this year, with a 100,000 b/d increase every year to reach 2.2 million b/d in 2024, when the president’s term comes to an end.

The energy policy as laid out to the regulators also includes prioritizing hydropower and CFE plants in electric power dispatch, per recent power sector rule changes.

In terms of natural gas, “CFE needs to come up with a plan for the use of excess gas acquired by the old government to avoid fines and excessive charges due to the bad business done during the neoliberal period,” the memorandum said.